Chelsea take on Manchester City at Stamford Bridge on Saturday evening. Here is the side we think Antonio Conte will pick for the game:

Chelsea will look to put themselves right in the mix for the Premier League title when they take on Manchester City at Stamford Bridge on Saturday evening.

Defence: David Luiz will drop out as he will serve the second of his three-match domestic suspension so Conte will be forced in to making one change to the back three that faced Atletico Madrid last night.

Andreas Christensen will no doubt be in the Italian coaches thoughts as he’s done well whenever called upon but I think we’ll see Antonio Rudiger start alongside Gary Cahill and Cesar Azpilicueta at the back.

Midfield:Conte went with Cesc Fabregas, Tiemoue Bakayoko and N’Golo Kante at Madrid last night but we’ll probably see one of the trio drop out this weekend.

Kante is certain to keep his place and I think Conte may opt to go with Bakayoko to offer more protection against a dangerous City attack so Fabregas may have to make-do with a place on the bench.

Attack: If Conte does drop Fabregas then we should see Pedro return in attack as the Spaniard was an unused substitute in Madrid last night due to a minor knock.

Eden Hazard is expected to keep his place as he’s now considered 100% fit and fully recovered from his broken foot so Willian may have to make-do with a place on the bench.

Alvaro Morata should retain his place up front which means Michy Batshuayi will once again be a substitute despite coming off the bench to score a last gasp winner at Madrid last night. 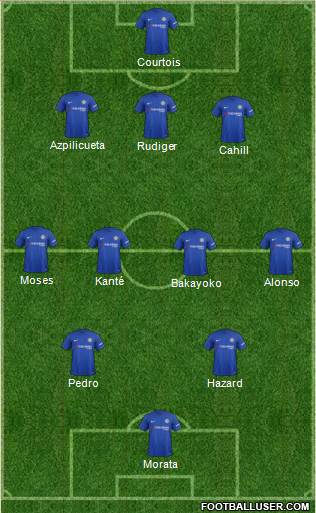