Liverpool take on Huddersfield Town at Anfield this afternoon. Here is the side I think Jurgen Klopp will select for the game:

Liverpool desperately need a win to get their top four hopes back on track when they take on Huddersfield Town at Anfield this afternoon.

Goalkeeper: Questions were asked of Simon Mignolet once again last weekend as he was at fault for two of Tottenham’s goals so there have been calls for Loris Karius to start between the sticks today. However, I think we’ll see Klopp stick with Mignolet.

Defence: The biggest question mark is what Klopp does with Dejan Lovren. The centre-back was hauled off after just 30 minutes at Wembley after putting in a horror-show display so his confidence will be rock bottom right now. I don’t see how Lovren can start today so I expect Ragnar Klavan to be brought in alongside Joel Matip.

Trent Alexander-Arnold is pushing for a recall but Joe Gomez could keep his place at right-back in the prolonged absence of Nathaniel Clyne while Alberto Moreno should once again start on the left.

Midfield: Gini Wijnaldum is back in contention after recovering from a minor knee injury that kept him out of the defeat at Tottenham last weekend so I expect we’ll see him come in for James Milner.

Jordan Henderson should once again lead the side out in the middle of the part this afternoon while Emre Can is also expected to keep his place with Adam Lallana still on the sidelines – although he is pencilled in to return after the international break.

Attack: Liverpool have been dealt a major blow with the news that Philippe Coutinho has been ruled out with an abductor injury so Alex Oxlade-Chamberlain could be given a rare start in attack.

Sadio Mane could be available again after the November international break but for now he remains on the sidelines with a hamstring injury so Mohamed Salah should once again start for the Reds.

Roberto Firmino is expected to continue to lead the line up front with Daniel Sturridge and Dominic Solanke having to make do with places on the bench. 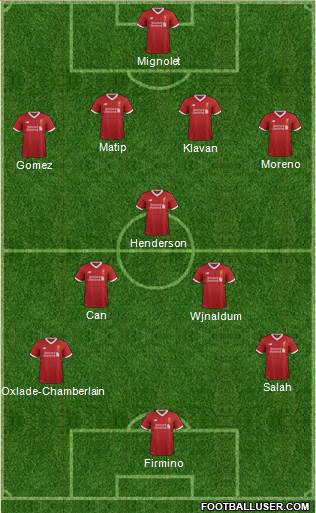