Arsenal take on West Ham at the London Stadium on Wednesday evening. Here is the side Gooner Mac thinks Arsene Wenger will select for the game:

Arsenal will look to close-in on the top four with a win when they take on West Ham at the London Stadium on Wednesday evening.

Goalkeeper: Petr Cech pulled off a couple of important saves against Southampton so there is no reason to think Wenger will even consider changing his goalkeeper tomorrow.

Defence: However, I do think we might see a change at the back. Shkodran Mustafi is still out with a minor thigh injury and Per Mertesacker replaced him at St Mary’s on Sunday afternoon.

But the German centre-back was well off the pace and was at fault for the opening goal so I think we might see Rob Holding given a chance to impress in the league tomorrow night.

Laurent Koscielny hasn’t been at his best in recent games but the French international should still keep his place alongside Nacho Monreal in the back three.

Midfield: There will be at least one change in midfield as Aaron Ramsey has been ruled out after suffering a hamstring injury during the closing stages against Southampton.

Wenger says the problem is only minor but Ramsey is still out of the trip to the London Stadium meaning Jack Wilshere could be given his first start in the Premier League this season.

Francis Coquelin and Mohamed Elneny are other options for Wenger but we need someone to offer some creativity in the middle of the park so Wilshere is the clear choice.

Granit Xhaka should keep his place alongside the 25-year-old while Hector Bellerin and Sead Kolasinac will be looking to get back on form after putting in disappointing performances last time out.

Attack: Alexis Sanchez came under more criticism from the fanbase following a poor performance at Southampton but he did create the equaliser and I don’t see Wenger leaving him out tomorrow.

Mesut Ozil is also expected to retain his place in attack so the likes of Danny Welbeck, Theo Walcott and Alex Iwobi will fight it out for places on the bench.

Olivier Giroud came off the subs bench to score a late equaliser on Sunday so he’s knocking on the door but I think Wenger will stick with Alexandre Lacazette up front with Giroud once again used as an impact sub. 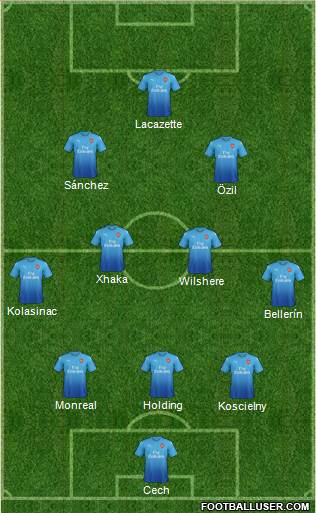