Liverpool take on Leicester City at Anfield on Saturday afternoon. Here is the side I think Jurgen Klopp will select for the game:

Liverpool will look to cement their position in the top four with a positive result when they take on Leicester City at Anfield on Saturday afternoon.

Goalkeeper: Simon Mignolet kept his place and secured a clean sheet during the 5-0 thrashing of Swansea City on Boxing Day so I expect the Belgian international to once again start between the sticks this weekend.

Defence: Joel Matip made a successful return to the starting eleven last time out after recovering from a thigh injury so the Cameroonian international should keep his place at the back.

Klopp opted to go with Ragnar Klavan alongside Matip against the Swans so we could once again see Dejan Lovren named among the substitutes on Saturday.

Trent Alexander-Arnold scored a fine goal against Swansea but Klopp has rotated his right-backs all season and I expect Joe Gomez to be recalled against Leicester while Andrew Robertson should continue on the opposite flank in place of the injured Alberto Moreno.

Midfield: Jordan Henderson has been ruled out until the start of February after scans revealed a tear in his hamstring so Emre Can should continue in midfield.

Alex Oxlade-Chamberlain should keep his place after a fine goal-scoring display last time out but with a trip to Burnley coming up on Monday, Klopp may be tempted to rotate so James Milner could come in for Gini Wijnaldum.

Adam Lallana continued his latest comeback with a cameo appearance off the bench against Swansea so he’ll be hoping to get more minutes under his belt this weekend.

Attack: Liverpool ran riot against Swansea and could have scored more than five so Klopp will be reluctant to mix things up too much but I think we’ll see at least one change.

Mohamed Salah has been outstanding this season but Klopp may look to protect the Egyptian goal-scoring machine by giving him a rest ahead of the trip to Burnley on Monday.

Sadio Mane is waiting for a recall after being left out against the Swans so he may come in to join Philippe Coutinho in attack after the Brazilian international put in another superb display last time out.

Klopp may also be tempted to rest Roberto Firmino but with Daniel Sturridge struggling with a muscle injury we should see the in-form attacker continue up front this weekend. 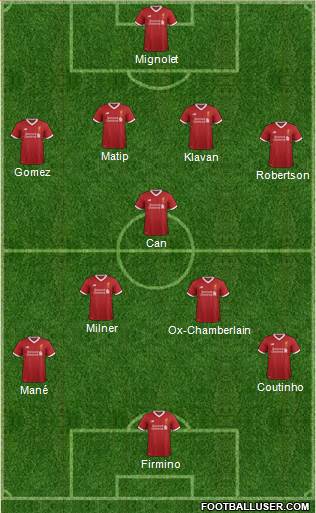