Arsenal crashed out of the third round of the FA Cup after slumping to a controversial 4-2 defeat to Nottingham Forest at the City Ground this afternoon. 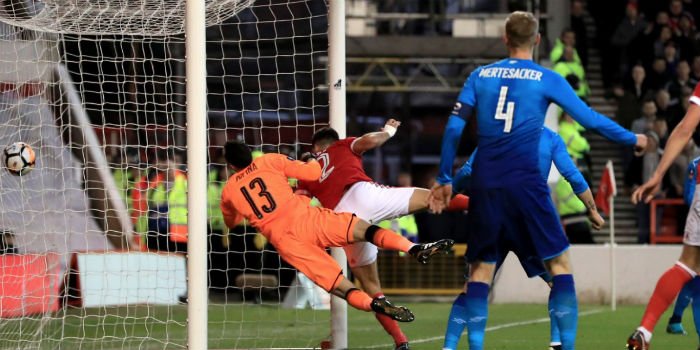 Arsenal crashed out of the third round of the FA Cup after slumping to a controversial 4-2 defeat to Nottingham Forest at the City Ground this afternoon.

The hosts opened the scoring in the 20th minute when a superb free-kick from Kieran Dowell was headed home from close range by Eric Lichaj after some woeful Arsenal defending.

We levelled things up just three minutes later when Per Mertesacker poked home for 1-1 in the 23rd minute after Rob Holding had headed a Theo Walcott free-kick on to the post.

However, Forest restored their lead shortly before half-time and it was a stunner as Lichaj volleyed in to the top corner of David Ospina’s net from the edge of the area.

Arsenal pushed for an equaliser but it was Forest who made it 3-1 after Rob Holding gave away a penalty. Ben Brereton stepped up to make it 3-1 from the spot in the 64th minute.

We pulled one back when Danny Welbeck tapped in to an empty net to make it 3-2 after goalkeeper Smith spilled the ball in the 79th minute and it looked like it was set-up for Arsenal to grab a late equaliser.

However, there was more controversy in the penalty area as Mathieu Debuchy was adjudged to have fouled Bertrand Traore even though replays showed he got the ball. To make matters worse, Dowell converted after kicking the resulting spot kick against his standing foot meaning the penalty should have been ruled out for a double touch but the referee allowed it.

There was no way back for Arsenal so we slumped to a 4-2 defeat and crash out of the FA Cup at the third round stage for the first time in 21 years.