Liverpool take on Manchester City at Anfield on Sunday afternoon. Here is the side I think Jurgen Klopp will select for the game:

Liverpool will be desperate to end Manchester City’s unbeaten run and tighten their grip in the top four when the two clubs meet at Anfield on Sunday afternoon.

Goalkeeper: Loris Karius started during the FA Cup win over Everton last time out but I think we’ll see Simon Mignolet recalled between the sticks against City.

Defence: Virgil van Dijk made a dream debut after scoring a late winner against the Toffees and the Dutch international is fully expected to keep his place this weekend.

Joel Matip was chosen as van Dijk’s partner last Friday and I think they have the potential to form a solid partnership so Matip should keep his place ahead of Dejan Lovren and Ragnar Klavan.

Joe Gomez could also retain his place at right-back with Trent Alexander-Arnold among the substitutes while Andrew Robertson should start at left-back as Alberto Moreno is still not deemed fit despite returning to training yesterday.

Midfield: Jordan Henderson has returned to light training but the midfielder is still unavailable for selection so I think we’ll see Emre Can keep his place in midfield.

Adam Lallana started against Everton in the FA Cup but I wouldn’t be surprised to see Gini Wijnaldum get a recall on Sunday with Alex Oxlade-Chamberlain the man to provide the creativity in the middle of the park.

Attack: Mohamed Salah has handed Liverpool a major boost as he’s been declared fit and available for selection after recovering from a groin injury that’s kept him out of the last two games.

Obviously there is no Philippe Coutinho after he secured his move to Barcelona this week so Sadio Mane is likely to keep his place on the opposite flank.

Daniel Sturridge is back in training after recovering from a hamstring injury but it remains to be seen whether he’ll be available having spent the last month on the sidelines. Either way, Roberto Firmino is almost certain to keep his place in the starting eleven with the Brazilian leading the line up front. 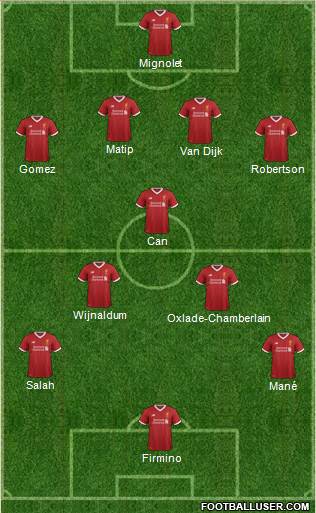