Players from Liverpool and Tottenham have dominated the WhoScored Premier League Team of the Week following this weeks round of midweek fixtures.

Players from Liverpool and Tottenham have dominated the WhoScored Premier League Team of the Week following this weeks round of midweek fixtures.

Liverpool closed-in on second place in the table after easing to a 3-0 victory over Huddersfield Town at the John Smith’s Stadium on Tuesday night.

Emre Can opened the scoring with a powerful low drive in to the bottom corner and it capped a fine performance from the German midfielder so it’s no surprise he’s made the TOTW with a score of 9.1.

Team mate Roberto Firmino also makes the cut after registering a score of 8.1 thanks largely to the Brazilian international scoring a superb goal from close range against the Terriers.

Tottenham boosted their hopes of finishing in the top four after easily beating Manchester United 2-0 at Wembley last night and the north Londoners have three players in the TOTW.

Hugo Lloris returned from illness to claim a clean sheet and he makes the team with a score of 7.9 while Jan Vertonghen also makes the cut after securing a score of 8.5 during another impressive display at the back.

Right-back Kieran Trippier also makes the TOTW after setting-up the second goal last night with Phil Jones slicing his cross in to his own net after Christian Eriksen had given Spurs an early lead.

Elsewhere, Theo Walcott continued his fine start to life on Merseyside after scoring twice for Everton last night and he makes the TOTW along with Man City duo Kevin De Bruyne and Raheem Sterling.

Here is the full Team of the Week: 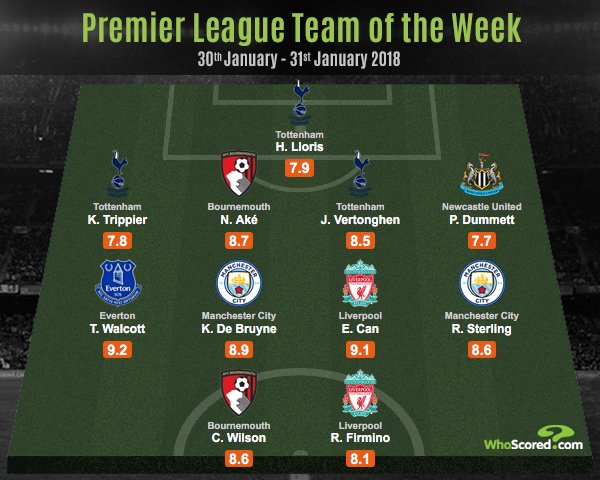