Tottenham take on Liverpool at Anfield on Sunday afternoon. Here is the side we think Mauricio Pochettino will select for the game:

Tottenham will be looking to close in on the top four when they take on Liverpool at Anfield on Sunday afternoon.

Goalkeeper: Hugo Lloris is certain to keep his place between the sticks ahead of Michel Vorm unless the Frenchman picks up a late knock.

Defence: Serge Aurier is back in contention after recovering from a minor ankle injury and he could come back in to the side in order to give Keiran Trippier a well-earned rest.

Danny Rose is also pushing for a recall but Pochettino has cast doubt over the defenders match fitness so I think we’ll see Ben Davies continue at left-back this weekend.

Toby Alderweireld has been in full training this week after recovering from a serious hamstring injury but after so long on the sidelines the Belgian won’t be 100% fit yet so I expect to see Davison Sanchez once again alongside Jan Vertonghen in the middle of defence.

Midfield: Harry Winks returned to full training today after recovering from an ankle injury that’s kept him out for over a month but a place on the bench is the best he can hope for as he’s not match fit yet.

However, Pochettino may decide to recall Victor Wanyama to add more defensive stability in the middle of the park against a dangerous Liverpool attack. Mousa Dembele is the man most likely to make way with Eric Dier keeping his place.

Attack: Tottenham were excellent during the 2-0 victory over Manchester United in midweek so Pochettino will be tempted to stick with his preferred front four.

Lucas Moura completed his move on deadline day from Paris Saint-Germain but the winger has been back in Paris today completing some personal issues and Pochettino doesn’t think he’ll be available to play on Sunday.

Fernando Llorente and Erik Lamela will offer options from the bench for Tottenham. 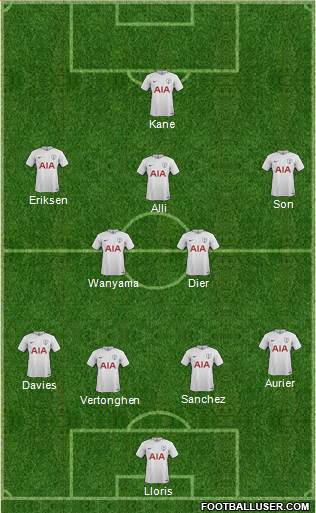