Liverpool welcome Newcastle United to Anfield on Saturday evening. Here is the side I think Jurgen Klopp will select for the game:

Liverpool will be looking for a win to go second in the table when they welcome Newcastle United to Anfield on Saturday evening.

Goalkeeper: Loris Karius is now Klopp’s first choice goalkeeper so the German youngster should once again start in goal with Simon Mignolet having to make do with a place on the bench.

Defence: Joe Gomez is pushing for a recall at right-back after returning to full fitness so we could see him replace Trent Alexander-Arnold but Andrew Robertson should retain his place ahead of Alberto Monreno after an impressive run of form lately.

Joel Matip was recalled to start alongside Virgil van Dijk during the win over West Ham last weekend and I think the duo will continue in the middle of defence on Saturday meaning Dejan Lovren will be named among the subs.

Midfield: Jordan Henderon was left out of the starting eleven for the win over the Hammers last time out so I think the Reds skipper will be recalled against Newcastle.

James Milner could be the unlucky man to make way as Emre Can should keep his place in the middle of the park after another impressive goal-scoring outing last weekend.

Gini Wijnaldum is expected to recover from the illness that kept him out of the West Ham clash so the Dutch international could replace Alex Oxlade-Chamberlain in midfield.

Attack: I don’t expect there to be any changes in attack as Liverpool have the best front three in the league right now with Mohamed Salah, Sadio Mane and Roberto Firmino all in superb form.

The trio were all on target during the 4-1 victory over West Ham last weekend and have developed an excellent understanding in recent months.

Liverpool have the second leg of their Champions League last-16 clash coming up on Tuesday but they hold a 5-0 advantage from the first leg so Klopp could decide to rest his attacking trio for that match.

It means the likes of Dominic Solanke, Adam Lallana and Danny Ings will once again have to make do with places on the bench this weekend. 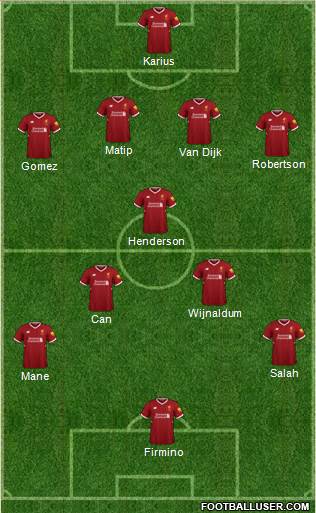