Liverpool will aim to reach the quarter finals of the Champions League when Porto arrive at Anfield tomorrow. Here is the side I think Klopp will select

Liverpool will look to finish the job and book their place in the quarter finals of the Champions League when Porto arrive at Anfield tomorrow night.

Goalkeeper: Loris Karius strengthened his position as Klopp’s first choice keeper with a vital save at 1-0 during the win over Newcastle at the weekend and he’s expected to continue between the sticks tomorrow.

Defence: Klopp has suggested he won’t make wholesale changes to his side, despite holding a commanding 5-0 lead from the first leg, however, I think we’ll see rotation in defence.

Joe Gomez is pushing for a recall at right-back so he could replace Trent Alexander-Arnold while Alberto Moreno is expected to come in to give Andrew Robertson a well-earned breather.

Midfield: Jordan Henderon returned to the starting eleven at the weekend and the skipper should keep his place in midfield while Alex Oxlade-Chamberlain may also be retained after another positive showing on Saturday.

However, Gini Wijnaldum has been ruled out once again due to illness so James Milner could come in the side in order to give Emre Can a rest. Attack: Klopp refused to confirm whether he’d rest any of his big guns in attack but I think he’d be crazy not to rest at least two of his front three. This Porto game is won already so he needs to look at the bigger picture and having them fresh for the United game is vital.

I don’t think Klopp will rest all three so perhaps Sadio Mane is favourite to retain his place with Mohamed Salah and Roberto dropping to the bench tomorrow night.

That would open the door for Adam Lallana to make his long-awaited return to the starting eleven while Dominic Solanke could also be given a rare chance to impress up front. 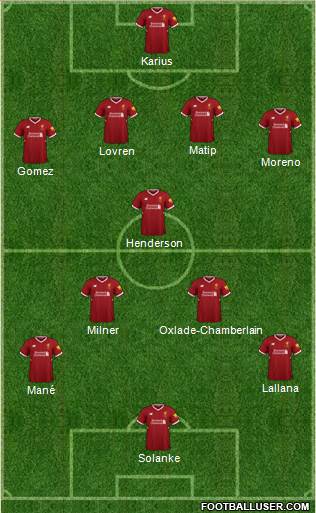