Arsenal welcome Stoke City to the Emirates on Sunday afternoon. Here is the side I think Arsene Wenger will select for the game:

Arsenal get back to Premier League action following the international break when we welcome Stoke City to the Emirates on Sunday afternoon.

We have a huge Europa League quarter final with CSKA Moscow coming up on Thursday so I think we’ll see plenty of changes tomorrow. Here is the side think Arsene Wenger will select for the game:

Goalkeeper: David Ospina will no doubt continue to be our keeper in the Europa League so I expect Petr Cech to come in between the sticks tomorrow.

Defence: Wenger opted to rest several of his key defenders against Watford prior to the win over AC Milan so I think he’ll do likewise this weekend.

Laurent Koscielny has been managing an on-going Achilles problem so he could be rested while I think Nacho Monreal and Hector Bellerin could also be given a breather as they’ve been carrying knocks recently.

Sead Kolasinac has been passed fit as he took part in full training today after picking up an ankle injury while away on international duty so he could start at left-back.

Ainsley Maitland-Niles started at right-back against Watford and I think he could come in again tomorrow while Rob Holding could partner Shkodran Mustafi in the middle of the back four.

Midfield: Jack Wilshere has trained this week after withdrawing from the England squad with a minor knee injury but I don’t think Wenger will risk him against Stoke.

Aaron Ramsey should also be rested ahead of the CSKA Moscow game after undergoing a minor groin operation last week so we could see Mohamed Elneny alongside Granit Xhaka in midfield.

Attack: Pierre-Emerick Aubameyang is set for a recall after being ineligible to play in Europe before the international break and he’ll replace Danny Welbeck up front.

Alexandre Lacazette is back in contention after recovering from a knee injury but I don’t think we’ll throw him straight back in to action just yet. It would make sense to give him 30 minutes in the second half if possible.

Henrikh Mkhitaryan and Mesut Ozil both started against Watford ahead of the Milan game so I expect Wenger will adopt a similar approach tomorrow while Alex Iwobi could get another chance to impress. 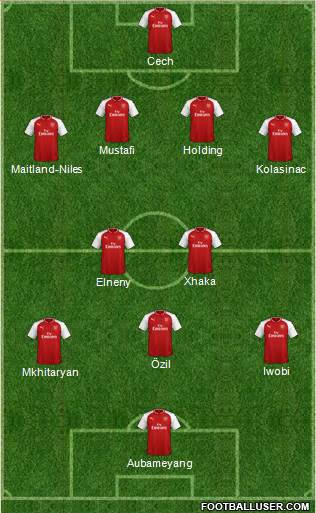