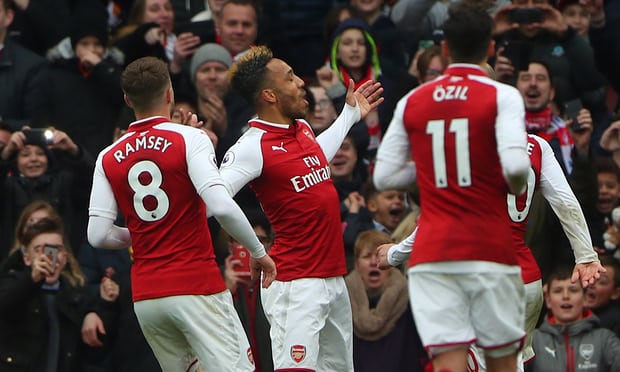 It was a sluggish start as we struggled to find any rhythm during the opening stages of the match and we went in to the break with the scores level at 0-0.

However, we were given the perfect opportunity to open the scoring in the 75th minute when Bruno Martins-Indi clipped Mesut Ozil in the area. Aubameyang made no mistake with the resulting spot kick to make it 1-0.

The Gabon international got his second of the match ten minutes later as he fired home to make it 2-0 following a Nacho Monreal flick-on from a corner.

Aubameyang was then given the ideal chance to complete his hat-trick when Alexandre Lacazette was barged over in the area. However, he allowed his fellow striker to take the spot kick and Laca stroked home to make it 3-0 late on.

The win sees us close the gap on fifth-placed Chelsea to five points ahead of their clash with Tottenham at Stamford Bridge this afternoon.