Both Managers To Make 3 Changes: Expected Line-Ups For Tottenham vs Man City

Man City will look to wrap-up the Premier League title when they take on Tottenham at Wembely on Saturday night. Here are our predicted line-ups:

Manchester City will look to wrap-up the Premier League title when they take on Tottenham Hotspur at Wembely on Saturday night. Here are our predicted line-ups for the game:

Mauricio Pochettino is expected to field his strongest possible team as the Spurs boss looks to put the pressure on Manchester United and Liverpool.

Hugo Lloris is certain to keep his place between the sticks despite his error against Stoke City last weekend while Jan Vertonghen will also retain his place in defence.

Pochettino has hinted that Toby Alderweireld will continue on the sidelines despite being fully fit so Davinson Sanchez should start alongside Vertonghen in the middle of the back four.

However, we should see the Spurs boss rotate his full-backs with Ben Davies coming in for Danny Rose – who’s been ruled out with a calf injury – while Kieran Trippier should replace Serge Aurier on the right.

Eric Dier is due a recall after being rested for the win at Stoke so Victor Wanyama is likely to make way with Mousa Dembele keeping his place in midfield.

Harry Kane got his ‘goal’ against Stoke after appealing to the Premier League and he’ll continue to lead the line up front while I think we’ll see Dele Alli and Christian Eriksen keeping their place in attack.

Erik Lamela and Lucas Moura are pushing for recalls but I think Hueng-min Son has done enough in recent months to warrant a starting spot.

Here is how I think we’ll see Tottenham line-up: 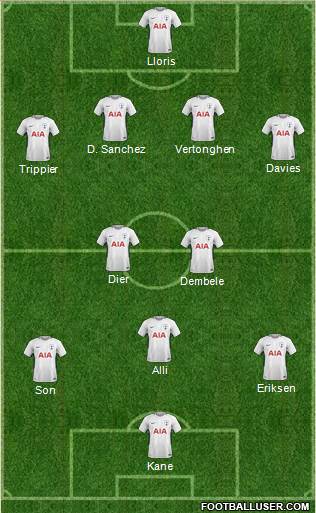 Guardiola tweaked his system against Liverpool in midweek but I think we’ll see City revert to their usual formation against Spurs this weekend.

Ederson will obviously continue in goal while Vincent Kompany should get a recall alongside Nicolas Otamendi in the back four after being left on the bench on Tuesday night.

Fabian Delph could replace Laporte at left-back but Kyle Walker will start on the right and he’ll be hoping to justify his decision to leave Spurs by sealing the title in front of his old supporters.

Fernandinho is suspended so Ilkay Gundogan will come in to the midfield while David Silva and Kevin De Bruyne should line-up in front of the German international.

Bernado Silva could drop to the bench with Leroy Sane and Raheem Sterling keeping their places while Gabriel Jesus will continue up front as Sergio Aguero has been ruled out after aggravating his knee injury. 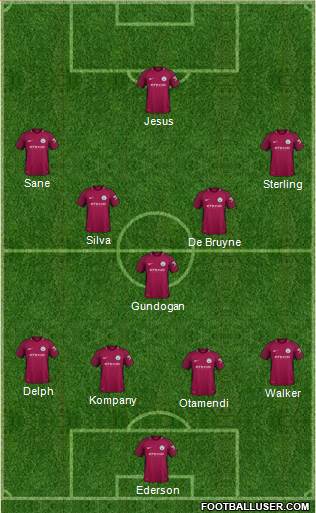