4-3-3: Klopp To Make 7 Changes Ahead Of Roma | Expected Liverpool XI vs West Brom

Liverpool will have one eye on their Champions League semi-final when they take on WBA on Saturday. Here is the side I think Jurgen Klopp will select

Goalkeeper: Loris Karius is now the established number one at Anfield so Klopp may be tempted to give him a rest with Simon Mignolet coming back in between the sticks this weekend.

Defence: The Reds boss is expected to make some changes in defence with Nathaniel Clyne in-line for a recall at right-back in order to give Trent Alexander-Arnold a well earned breather.

Andrew Robertson should also be rested so Alberto Moreno could come in to make a rare start at left-back while Ragnar Klavan will start in order to give Dejan Lovren more time to recover from a knock that he picked up against Bournemouth.

Ideally Virgil van Dijk would also be rested but with Joe Gomez not fully fit from an ankle injury and Joel Matip out for the season, the Dutchman is likely to face West Brom on Saturday.

Midfield: Klopp doesn’t have too many options to rotate in midfield as Emre Can has been ruled out for the rest of the season with a back injury while Adam Lallana is in South Africa recovering from a hamstring injury.

Therefore, Jordan Henderson should keep his place in midfield along with Georgino Wijnaldum but James Milner could get a recall in order to give Alex Oxlade-Chamberlain a rest ahead of the Roma game.

Attack: Klopp would be foolish to risk his front three this weekend so I expect at least two of his attackers to be rested ahead of the Champions League first leg on Tuesday night.

Mohamed Salah is probably the main player that should be protected as he’s been in sensational form this season having scored 40 goals in all competitions so I expect him to be left out to make sure he’s ready for Roma.

Roberto Firmino works tirelessly up front so the Brazilian international could also be given a breather with Dominic Solanke leading the line up front against West Brom.

Danny Ings could get another chance to impress but Klopp doesn’t have too many other options to bring in so Sadio Mane may be risked. 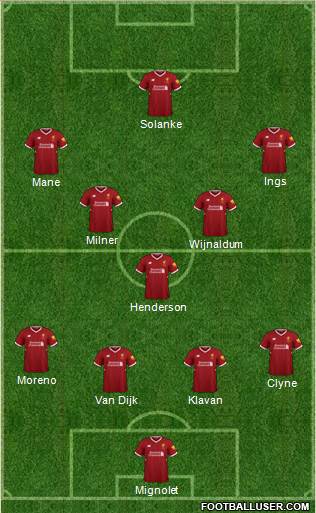