Arsenal take on Manchester United at Old Trafford on Sunday afternoon. Here is the side I think Wenger will select for the game:

Arsenal will have one eye on their Europa League semi-final with Atletico Madrid when they visit Manchester United on Sunday afternoon.

Goalkeeper: David Ospina was selected against Madrid on Thursday night so I expect the Colombian will keep his place in Spain meaning Petr Cech is likely to start against United.

Defence: Wenger is set to make wholesale changes to his defence with Laurent Koscielny, Hector Bellerin and Nacho Monreal all unlikely to start at Old Trafford to protect them ahead of the Madrid game.

Calum Chambers could get a run out at right-back with Sead Kolasinac expected to fill-in on the left while Rob Holding should start alongside Shkodran Mustafi in the middle of the back four.

Midfield: Aaron Ramsey and Jack Wilshere are expected to be rested for the Europa League but Granit Xhaka may be retained to add some experience to the midfield tomorrow.

Ainsley Maitland-Niles is pushing for a rare start in the middle of the park while Joe Willock is being tipped to feature again after making his Premier League debut against Newcastle earlier this month.

Mohamed Elneny is already back in light training as he looks to make a swift recovery from an ankle injury but the Egyptian international remains on the sidelines along with Santi Cazorla.

Attack: Pierre-Emerick Aubameyang is expected to start up front as he’s ineligible in Europe so Alexandre Lacazette is likely to be given a breather ahead of the return leg in Madrid.

I don’t think we’ll see Mesut Ozil starting against United as he needs to be protected for the Europa League while Danny Welbeck could also miss out against his former side.

Alex Iwobi is almost certain to start at Old Trafford while Henrikh Mkhitaryan is back in contention after returning to full training following a five-game absence with a knee injury.

The Armenian international may not be fit enough to last the full ninety minutes but Wenger will want to give him some playing time to build on his match fitness ahead of Madrid. 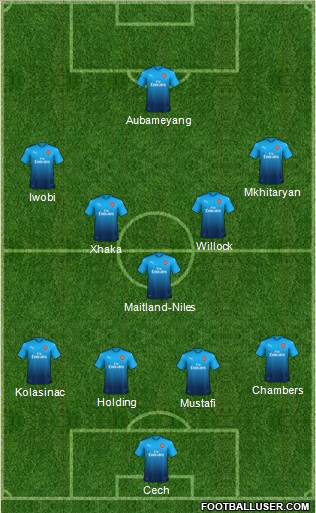