Arsene Wenger takes charge of his final home game as manager of Arsenal when Burnley head to the Emirates on Sunday. Here is the side I think Wenger will pick

Arsene Wenger will take charge of his final home game as manager of Arsenal when Burnley head to the Emirates on Sunday afternoon.

Goalkeeper: David Ospina was given the nod against Atletico Madrid on Thursday night but I think we’ll see Petr Cech recalled tomorrow.

Defence: Laurent Koscielny has been cruelly ruled out for several months and will miss the World Cup after picking up a serious Achilles injury during our Europa League defeat on Thursday.

Calum Chambers replaced Koscielny in the 12th minute against Madrid and was excellent so he should be given another chance to impress against Burnley.

Kostantinos Mavropanos will be hoping to feature following his impressive debut against Man Utd last weekend but I think Wenger will stick with Shkodran Mustafi tomorrow.

Hector Bellerin and Nacho Monreal will have been disappointed with their end products on Thursday as their crossing was woeful against Madrid but I think both will keep their places as Wenger will want to go out with a win on home soil.

Midfield: Ainsley Maitland-Niles is pushing for a recall after impressing in a central midfield role at Old Trafford last week but I think Wenger may only play two midfielders meaning AMN is likely to be on the bench.

Jack Wilshere may drop out with Aaron Ramsey keeping his place alongside Granit Xhaka in the middle of the park but Mo Elneny is out with an ankle injury.

Attack: Pierre-Emerick Aubameyang is set to return and he could play on the left side of the attack again after being deployed in that role against United last weekend. That would allow Alexandre Lacazette to lead the line up front but he and Aubameyang could rotate during the game.

Mesut Ozil came under fire for his poor performance against Madrid and while some of the criticism was justified, I don’t think it’s fair to always single him out when most of the team played badly. Anyway, hopefully the German international starts and gets back on form tomorrow.

Henrikh Mkhitaryan is expected to be recalled after coming off the bench on Thursday night so Danny Welbeck will make way and drop to the bench alongside Alex Iwobi. 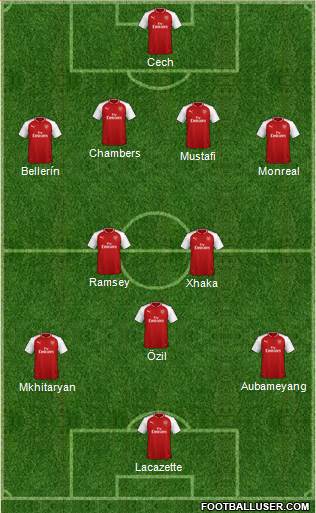