Arsenal take on Everton at the Emirates Stadium on Sunday afternoon. Here is the side Gooner Mac thinks Unai Emery will select for the game:

Arsenal will be hoping to make it four consecutive Premier League victories in a row when we take on Everton at the Emirates Stadium on Sunday afternoon. Here is the side Gooner Mac thinks Unai Emery will select for the game:

Goalkeeper: Bernd Leno didn’t have too much to do other than pick the ball out the net twice against Vorskla so he didn’t do enough to convince Emery he should be our No.1 just yet. He did look more comfortable with the ball at his feet than Petr Cech but I still expect the 36-year-old to reclaim the gloves tomorrow.

Defence: Stephan Lichtsteiner was solid enough on his full debut on Thursday night but Hector Bellerin is set for a recall against Everton while Shkodran Mustafi should come in to replace Rob Holding in the middle of defence.

Sokratis continued his fine form with another impressive display in midweek so he’ll keep his place while Nacho Monreal will start at left-back once again with Sead Kolasinac still not available – although the Bosnian is close to making his return from a knee injury.

Midfield: Lucas Torreira will be handed a late fitness test after picking up a knee problem on his full debut against Vorskla. The Uruguayan international was impressive and I’d like to see him keep his place but I don’t think Emery will risk him.

Therefore, Matteo Guendouzi is likely to come back in to midfield while Granit Xhaka will replace Mohamed Elneny after being rested for the Europa League clash.

Attack: Aaron Ramsey has been deployed in the advanced central midfield role in recent weeks so I expect him to come back in against Everton after being rested in midweek.

Mesut Ozil came off the bench to score against Vorskla and although I still think his best position is in the No.10 role, the German star is likely to start out on the wing where he’s been deployed in the last two league games.

Henrikh Mkhitaryan was excellent in the Europa League after grabbing two assists but the Armenian international is a doubt for the Everton game after picking up an ankle injury so we’ll have to wait and see if he makes the squad.

Pierre-Emerick Aubameyang scored two sublime goals on Thursday night which should do his confidence no harm and I expect him to start out on the left side of the attack tomorrow afternoon.

Alex Iwobi will feel unlucky to miss out as he was superb against Vorskla but we need to make room for Alexandre Lacazette so with Aubameyang moving out wide it means Iwobi will have to settle for a place on the bench. Danny Welbeck will also drop out despite scoring on Thursday night. 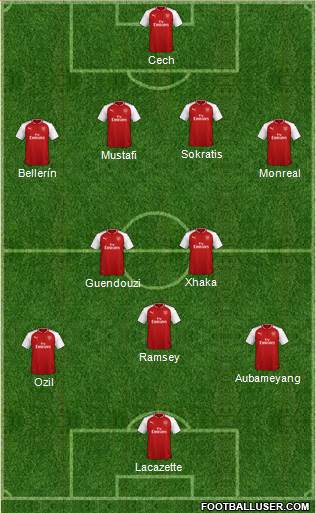