Manchester United’s crisis deepened today after Jose Mourinho and Paul Pogba were caught on camera having a frank exchange of words on the training ground. 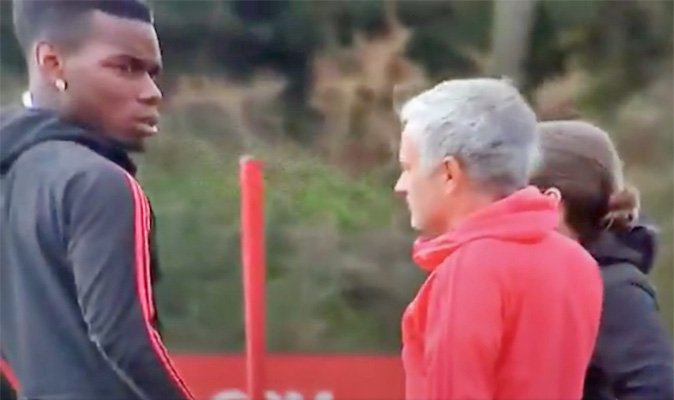 Manchester United’s crisis deepened today after Jose Mourinho and Paul Pogba were caught on camera having a frank exchange of words on the training ground.

Tensions between the pair have been simmering all season amid reports of a bust-up during the opening weeks of the new campaign and they appeared to have put the dispute behind them after Mourinho made Pogba his vice-captain.

However, the row was re-opened after Pogba openly criticised Mourinho’s defensive tactics during a post-match interview following Manchester United’s disappointing 1-1 draw with Wolves at Old Trafford on Saturday evening.

Pogba was subsequently left out of the squad for Tuesday night’s shock Carabao Cup penalty shoot-out defeat to Derby County and Mourinho confirmed reports after the game that he had stripped the midfielder of his vice-captaincy.

The United boss insists he has no problem with Pogba but footage captured by Sky Sports News camera’s at training today suggests otherwise as the feuding pair were involved in a tense exchange of words at Carrington.

What has been said between the pair this morning? ? pic.twitter.com/nRiTEgDJlH

As you can see, Pogba was stopped in his tracks by Mourinho as he greeted the coaching staff at training and glared at the United boss for several seconds. Whatever Mourinho said to the Frenchman didn’t go down too well as Pogba got animated as he talked back to the United manager as they continued to have words.

The situation between the two men is coming to a head and it’s led to speculation that Pogba could be trying to force a move away from Old Trafford this winter. Mourinho is clearly losing patience with the midfielder so it’s difficult to see how both men will still be at United by the end of the season.