Manchester United take on Liverpool at Anfield on Sunday afternoon. Here is the line-up I think Jose Mourinho will go with:

Manchester United will look to get back on track with a positive result when they take on Liverpool at Anfield on Sunday afternoon. Here is the line-up I think Jose Mourinho will go with:

Goalkeeper: David De Gea was rested for the Champions League defeat at Valencia in midweek so the Spaniard is certain to be recalled with Sergio Romero making way and Man Utd will need their No.1 in top form if they’re to take anything away from Anfield.

Defence: United will hand late fitness test to a number of players ahead of the game on Sunday. Luke Shaw missed the trip to Spain on Wednesday night after picking up a knock last weekend while Chris Smalling was forced off with a foot problem during the win over Fulham. Neither injury is thought to be serious so I expect Shaw and Smalling to return against Liverpool.

Marcos Rojo is a doubt after being forced off at half-time against Valencia while I think Phil Jones will drop out after his horror-show in midweek so Eric Bailly could keep his place with Victor Lindelof still missing through injury.

Mourinho has already confirmed that Ashley Young will be recalled on Sunday so he could replace Antonio Valencia at right-back. Diogo Dalot has impressed recently but he’s a doubt with a knock.

Midfield: Mourinho may be tempted to play a back three but I think he may go with 4-3-2-1 with Nemanja Matic recalled to play in the holding role in front of the defence after being rested in midweek.

Paul Pogba was recalled against Valencia after losing his place recently but I don’t think he did enough to force his way back in to Mourinho’s starting eleven. The Portuguese boss is likely to opt for the battling qualities of Marouane Fellaini and Ander Herrera in midfield in order to try and disrupt Liverpool so Pogba may have to make-do with a place on the bench.

The French World Cup winner could be joined on the sidelines by Fred after he failed to take his chance in midweek while Scott McTominay may also be named among the substitutes if he recovers from a knock which forced him out of the Valencia game.

Attack: Mourinho has confirmed Marcus Rashford and Jesse Lingard will be recalled against Liverpool after being named on the bench against Valencia on Wednesday night.

Anthony Martial is a doubt with a hamstring injury that hampered him in recent games while Alexis Sanchez remains out through injury so we may see Rashford and Lingard on the wings this weekend.

Romelu Lukaku was disappointing against Valencia but I think Mourinho may start him to have a focal point up front. United are likely to sit back and allow Liverpool to have the majority of possession so they may need Lukaku to provide a presence in attack that can hold the ball up and relieve some pressure. 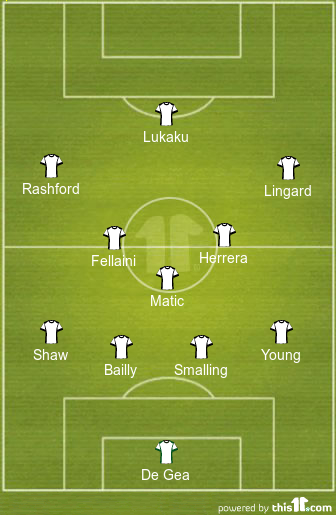