Liverpool take on Newcastle United at Anfield on Boxing Day. Here is the team we think Jurgen Klopp will select for the game.

Liverpool will look to tighten their grip at the top of the table with a win when they take on Newcastle United at Anfield on Boxing Day. Here is the team we think Jurgen Klopp will select:

Goalkeeper: I don’t think there can be much debate over who will start in goal as Alisson is certain to keep his place between the sticks with Simon Mignolet on the bench once again.

Defence: However, Klopp may be tempted to do a bit of rotation in defence as he looks to keep players fresh for the huge upcoming matches with Arsenal and Manchester City. Therefore, Andrew Robertson may be given a breather with Alberto Moreno coming in at left-back.

Trent Alexander-Arnold will be assessed ahead of the game as he looks to return from injury but I don’t think Klopp will rush him back so Nathaniel Clyne may get another chance to impress at right-back having done well against Man Utd last week.

Liverpool don’t have too many options to freshen things up in the middle of the back four as Joe Gomez and Joel Matip remain on the sidelines so Dejan Lovren is expected to continue alongside the hugely impressive Virgil van Dijk.

Midfield: We should see some changes in midfield too with Georginio Wijnaldum expected to be recalled after he was left out during the win at Wolves. James Milner may also move in to midfield after a spell at right-back so Fabinho and Jordan Henderson may be given a rest.

Klopp could tinker with his system to bring Adam Lallana back into the side after Naby Keita picked up a knock at Wolves. It’s not thought to be serious but Liverpool won’t want to take any risks with the Guinean international.

Attack: The Liverpool boss may take the opportunity to rest some of his key attackers with two huge games coming up so Mohamed Salah and Roberto Firmino may drop to the bench against Newcastle.

Xherdan Shaqiri is certainly pushing for a recall so we could see the Swiss international coming in to the attack while Daniel Sturridge may be given another chance to impress up front.

Sadio Mane should retain his place as Klopp won’t risk replacing all three of his main attackers so Divock Origi will have to make do with a place on the bench once again.

Liverpool are obviously in great form and Klopp won’t want to disrupt that too much but he also knows he needs to keep his key men fresh during the busy festive period and the game against Newcastle is the best opportunity to rest some players. 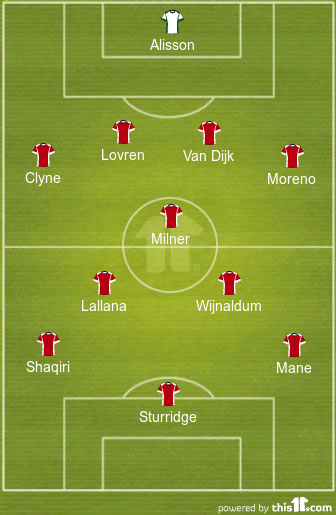