League leaders Liverpool take on Arsenal at Anfield on Saturday evening. Here is the team we think Jurgen Klopp will select:

Liverpool will look to tighten their grip at the top of the table with a win when they take on Arsenal at Anfield on Saturday evening. Here is the team we think Jurgen Klopp will select:

Goalkeeper: There is no doubt who will start in goal this weekend as Alisson is certain to keep his place between the sticks with Simon Mignolet on the bench once again.

Defence: Klopp is also unlikely to tinker too much with his defence as Joel Matip remains out with a broken collarbone while Joe Gomez is still working his way back to full fitness from a fractured leg so Dejan Lovren is set to continue alongside Virgil van Dijk in the middle of the back four. The Croatian international has been in good form of late and scored a superb goal against Newcastle so he should be in confident mood ahead of Arsenal’s visit on Saturday.

I don’t think we’ll see any change at left-back with Andrew Robertson keeping his place ahead of Alberto Moreno while Trent Alexander-Arnold is expected to start once again at right-back. Nathaniel Clyne is an option if Klopp wants to rotate but James Milner could miss out with a muscle issue.

Midfield: The versatile Milner was forced to miss the win over Newcastle on Boxing Day and remains a doubt for the Arsenal clash so he’s unlikely to be risked ahead of the crucial showdown with Manchester City.

However, I think we could see Klopp make a slight tweak to his formation to bring in another midfielder with Naby Keita and Fabinho both expected to be recalled after being named on the bench on Wednesday afternoon.

Xherdan Shaqiri could be sacrificed yo give Liverpool a bit more solidity in the middle of the park. Georginio Wijnaldum could keep his place in the three-man midfield with Jordan Henderson the man to make way.

Attack: I was surprised to see Klopp resist the temptation to rest some of his key attackers against Newcastle on Boxing Day. The Liverpool boss would be a brave man to leave the likes of Mohamed Salah or Sadio Mane out against Arsenal but then he also has the City game next week to think about, too.

Daniel Sturridge, Divock Origi and Adam Lallana are all pushing for recalls but I can’t see Liverpool going with a weakened team on Saturday so I expect Salah and Mane to once again support Roberto Firmino in attack. 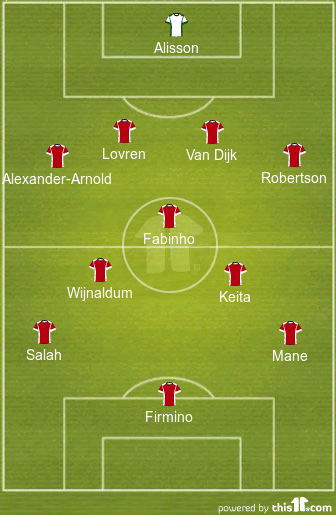