Here is our match preview ahead of Arsenal’s Premier League clash with Newcastle including team news, expected line-ups and prediction

Arsenal will be looking to go third in the table with a win over Newcastle United at the Emirates Stadium this evening.

The international break came at the wrong time for Arsenal as we were building some momentum after beating Manchester United 2-0 before booking our place in the quarter finals of the Europa League with a 3-0 win over Rennes.

We head into tonight’s game sitting fifth in the Premier League table but we can climb up to third and go two points clear of Tottenham and Man Utd, and three ahead of Chelsea, with a win over Newcastle. You can back Arsenal to win tonight at odds of 1.37 with MustardBet.

Arsenal will have just two home league games left this season after tonight’s match so it’s vital we pick up all three points and Unai Emery will be up against a Newcastle side who sit 14th in the division after drawing at Bournemouth last time out.

Arsenal will hand a late fitness test to Granit Xhaka after he picked up a thigh injury while away on international duty. Matteo Guendouzi is on stand-by to fill-in if he misses out as Lucas Torreira is suspended.

Aaron Ramsey is expected to be fit after recovering from a thigh issue that kept him out of Wales duty while Nacho Monreal is also in contention after shaking off a minor calf problem.

Sokratis is pushing for a recall but Danny Welbeck, Hector Bellerin and Rob Holding all remain on the sidelines with long-term injuries. Alexandre Lacazette is expected to start up front and you can back the Frenchman to score first at odds of 4.77.

Newcastle will be without Fabian Schar through suspension but Jamaal Lascelles is back in contention after recovering from a knee injury. Sean Longstaff remains on the sidelines with a knee problem. 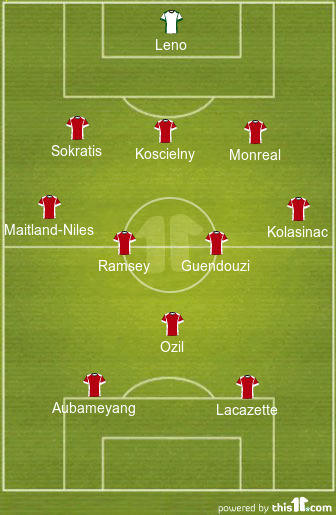 Arsenal 3-1 Newcastle: The Magpies can be a dangerous side on their day and usually step things up against the big boys. However, Arsenal have a superb home record against Newcastle having won our last six meetings and we’ve won our last nine league games at the Emirates so we should be confident tonight. I think Arsenal will have too much firepower for the visitors and will ease to a 3-1 victory – which can be backed at odds of 10.67.