Rui Patrício: Who is the man guarding the posts at Moulinex?

A detailed look at the history of Portuguese goalkeepers and why Rui Patricio should go down as arguably the best ever. 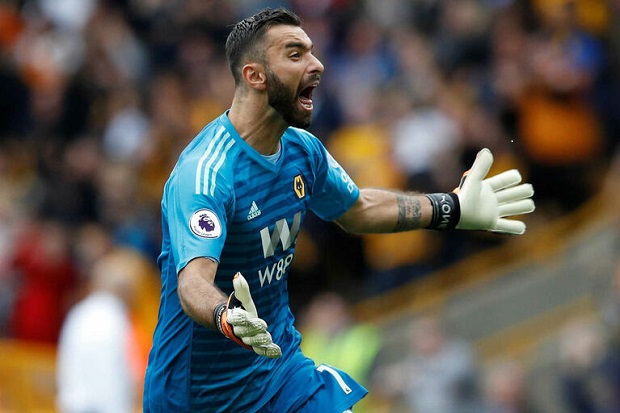 Portugal have given the world many talents, both in attack, midfield and defense. From the most notorious Cristiano Ronaldo, Ballon D’Or winner Luís Figo, maestro Rui Costa, to Chelsea’s legendary center back Ricardo Carvalho. One can also not forget about legendary Eusebio, who had a brilliant career during the 60’s. Nonetheless, it seems that the goalkeepers produced in the Lusitanian country haven’t shared the same spotlight as other players in different positions.

It’s not like Portugal haven’t produced quality goalkeepers. Vítor Baía is the first who comes to mind, being one of the top 10 players with most titles in his career, with a Champions League and a UEFA Cup to his name. However, he is sadly still seen as a legend only within Portuguese borders, since his stint in Barcelona didn’t go exactly as planned, mainly due to injuries, which led to him losing his place between the posts to Ruud Hesp.

Another Portuguese keeper that you might remember, specially if you are from England, is Ricardo. Having his most prolific seasons in Boavista and Sporting CP, Ricardo Pereira rose to fame after a brilliant performance in Euro 2004, helping the national team to make its way to the final.

His most remarkable moment would be during the penalty shootout against the Three Lions in the quarter finals, where he oddly decided to take off his gloves to defend a penalty from Darius Vassell. A decade later he would claim that was an instinct, but this bizarre idea, followed by Ricardo scoring the decisive penalty himself, would grant him a place in football history.

Still, besides his incredible penalty defending accuracy, Ricardo had plenty of inconsistencies, which didn’t make him such a reliable keeper, as Baía, for example. During the Euro 2004 final, against Greece, he came out wrongfully from the goal, during a corner kick, leaving a chance for Charisteas to score an easy header. This naïve mistake would overshadow not only his performances in previous tournament fixtures but cost the title to Portugal’s national team in their home ground.

He still had quite a career for his national team, performing well at the 2006 World Cup, where he was the second keeper with most saves, just below champion Gianluigi Buffon. Nevertheless, Ricardo didn’t have a brilliant career outside of his country. Having a three-season spell in Betis, where he was rarely a starter and later in 2010/11 he would again have a very low-key passage through the English Championship, where he wore Leicester’s jersey.

This brings us to another Portuguese goalkeeper, who hasn’t hung up his boots yet and that is Rui Patrício. The current Wolverhampton goalkeeper is 31 years old and opposite to Ricardo, his performance in a Euro final, 2016, actually was crowned with the ultimate glory, when Portugal lifted the cup in Paris. In the end this is what separates the players who are marked as mere footnotes due to one or two performances and the ones who become immortal, having their names appearing next to a trophy.

If there are any doubts that Patricio has become a legend, at least in his country, tell that to the people of his hometown, Leiria, where the man has an actual statue, immortalizing his fingertip save against Griezzman’s attempt in Stade de France. And the truth is, Cristiano Ronaldo might have stolen all the headlines during Portugal’s Euro 2016 run, especially after his injury in the final and the emotional ‘coaching’ on the sidelines, but one cannot forget how well played Patrício in that game.

Along with Pepe, the goalie was likely the most important player for Portugal’s triumph in the tournament. His save in the round of 16 after Croatia’s Domagoj Vida effort, his defense in the penalty shootout against Poland’s midfielder Blaszczykowski and, ultimately, his countless stops in the final against France, are enough to show how crucial his performances were throughout the competition.

Still, even after that astounding performance for his national team, accumulated with consistent displays in his club Sporting CP, didn’t seem to be enough to attract the investment of European giants. Meanwhile, during the last two years, we saw Premier League teams splashing the cash to reinforce their goalkeeping position, with Ederson arriving to Manchester City for £35 million, Alisson from Roma to Liverpool for £66.8m and Kepa coming to Chelsea for £71m.

While we can argue about the price tags on some of these players, the one that stands out must be Everton giving £25m for young Jordan Pickord. While the other names mentioned have proven to be important signings, Pickford hasn’t guaranteed such a desired security between the posts. Yet, we can understand that those four teams have chosen these names because all of them are younger than Rui Patrício.

Despite his aging factor, Patrício’s experience was probably the key factor to Wolverhampton rushing to sign him after his fallout with his boyhood club Sporting CP last summer. After 12 seasons at the Lisbon club, the goalkeeper asked to terminate his contract with the team after the harassment of president Bruno de Carvalho and the following events to the violent academy invasion of 15th May, allegedly done by some ultras of Sporting.

Wolves were probably delighted, since they probably snatched the bargain of the transfer window, signing a brilliant player on a free transfer, but later it would cost them £16m, after a settlement with Sporting’s board. Despite this, considering Arsenal paid £19.2m for German keeper Bernd Leno, the fee for the Portuguese seems reasonable. More than half a season later, Patricio has averaged 89 saves in the Premier League, putting him above Pickford and Leno, also having the same number of clean sheets as the Arsenal keeper (6).

Patrício might be one of the reasons for the success of Nuno Espírito-Santo’s team, who are probably the dark horse of this season’s Premier League. At the moment, they are safely in 8th place, just behind the usual top 6 and Leicester (who have one more game on their pocket), averaging also a positive goal difference. Wolves also have less goals conceded than Arsenal and Manchester United.

His performance against the Red Devils one weekend ago, gave him proper accolades, after Wolves defeated Ole’s team at the Molineux.  The recently appointed Manchester United coach praised the performance of the Portuguese keeper, blaming his performance for the result and the loss of the three points.

Whatever the future holds for Wolverhampton and their Portuguese army, we might be sure that as long as they keep Patrício between the posts they won’t need to worry about that position. Also, for now, no matter if he follows his career in the Premier League or elsewhere, Patrício should be known, maybe as Portugal’s best goalkeeper ever, and for sure the best one ever to play in the Premier League.