Barca will fly to England on Tuesday afternoon before training on the Old Trafford pitch later that evening as the La Liga champions prepare for the huge Champions League clash with United.

The Catalans will be without Thomas Vermaelen as the former Arsenal centre-back has been ruled out with a leg injury. Vermaelen has endured a difficult season due to a number of injuries that have restricted him to just 11 appearances in all competitions and the Belgian international will now sit out the first leg against United later this week.

However, Barcelona haven’t given up hope of Ousmane Dembele proving his fitness for the game. The Frenchman has missed Barca’s last four matches after suffering a hamstring injury in early March.

Dembele has been taking part in light training over the past few days and boss Ernesto Valverde hinted last week that they were hopeful the attacker could return to the squad for the game against Man Utd on Wednesday.

The 21-year-old has been named in the travelling squad but will need to be assessed as he’s not yet been given the all-clear from the Barcelona medical team to feature at Old Trafford.

Jean-Clair Todibo will also travel despite not being registered to play in the Champions League this season but Rafinha once again misses out as he’s still recovering from a serious knee ligament injury that he sustained in December.

Here is the full Barca squad that will travel to England tomorrow: 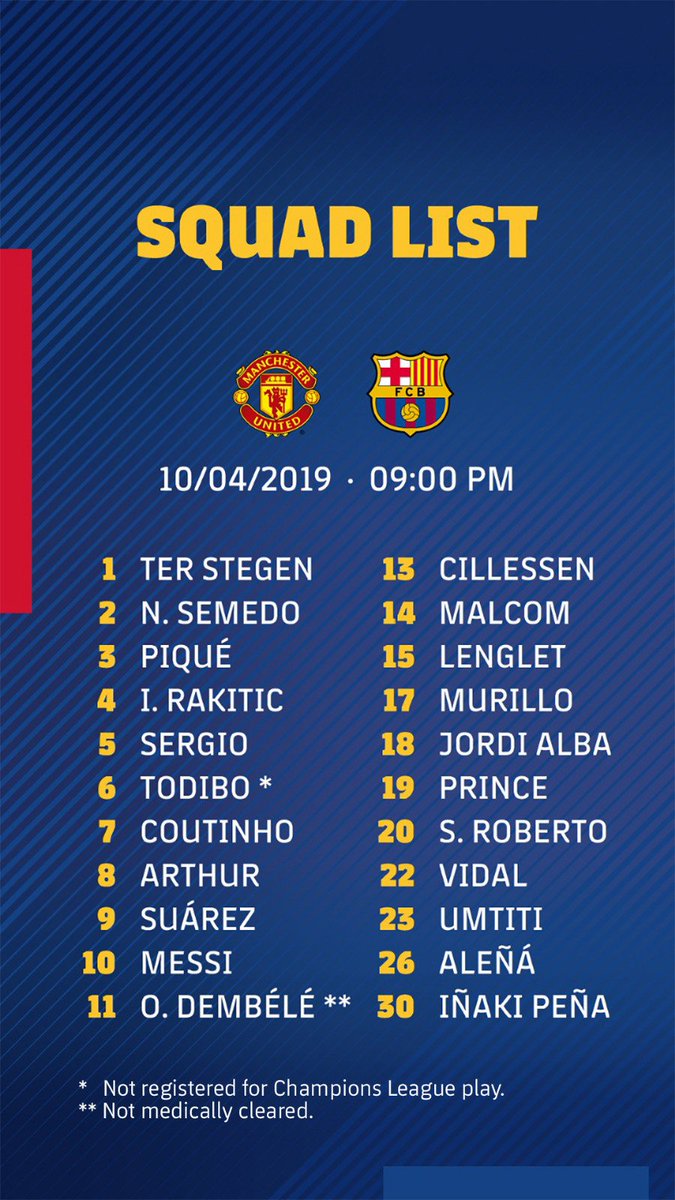 Obviously the stand out names to look out for are Lionel Messi and Luis Suarez but the Barcelona squad is packed with quality and Man Utd will be expecting a hugely difficult game at Old Trafford on Wednesday night.

The Spaniard’s warmed-up for the game with a crucial 2-0 victory over Atletico Madrid on Saturday with Messi and Suarez scoring the goals that moved Barcelona 11 points clear at the top of the La Liga table.