Chelsea will be looking for a positive result against Liverpool at Anfield on Sunday afternoon. Here is how we think Chelsea will line-up:

Chelsea will be looking to close-in on the top four with a positive result against Liverpool at Anfield on Sunday afternoon. You can back the Blues to win the game at odds of 17/4 with BetUK.

Here is the side I think Maurizio Sarri will select for the game:

Goalkeeper: I don’t think we need to deliberate for too long over who’ll start in goal as Kepa Arrizabalaga will retain his place ahead of Willy Caballero tomorrow.

Defence: However, Chelsea are expected to make a couple of changes in defence as David Luiz should be recalled alongside Antonio Rudiger in the middle of the back four after being rested for the Europa League win over Slavia Prague on Thursday night. Andreas Christensen is the man likely to make way.

Cesar Azpilicueta is almost certain to start once again at right-back but Marcos Alonso could drop out despite scoring the winner in midweek with Emerson Palmeiri pushing for a recall at left-back.

Midfield: Chelsea rested N’Golo Kante against Prague on Thursday so the French international is set for a recall in midfield against Liverpool this weekend. Jorginho is certain to keep his place as he’s a key player in Sarri’s system so at least one of Ross Barkley or Mateo Kovacic will drop out.

Ruben Loftus-Cheek will be hoping to be recalled after being named on the bench in the Europa League tie last time out for Chelsea but I think Sarri may go with Barkley as the former Everton trainee should be keen to get one over Liverpool and dent their title push.

Attack: Chelsea star Eden Hazard made a 30 minute appearance on Thursday night after being named on the bench but the Belgian international is certain to be recalled at Anfield tomorrow afternoon and Klopp has already highlighted him as the man to watch and you can bet on him to score at any time at odds of 11/5.

Callum Hudson-Odoi is also pushing to be recalled after not featuring against Prague. The 18-year-old had started Chelsea’s previous two games and was hugely impressive so fans will be keen for Hudson-Odoi to start against Liverpool tomorrow afternoon.

Pedro and Willian would therefore drop to the bench while Gonzalo Higuain could be recalled up front with Olivier Giroud making way after a disappointing performance in the Europa League. 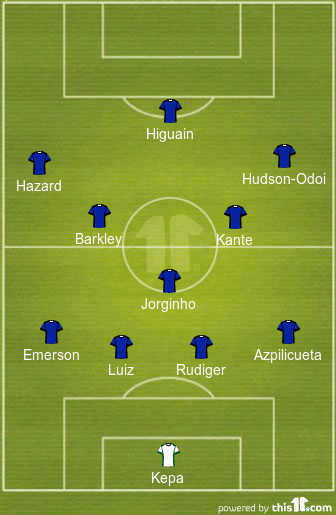