Chelsea take on Arsenal in the final of the Europa League on Wednesday night. Here is the side I think Maurizio Sarri will select for the game:

Chelsea will be looking to end the season with silverware when they take on Arsenal in the final of the Europa League on Wednesday night. Here is the side I think Maurizio Sarri will select for the game:

Goalkeeper: Kepa Arrizabalaga has been used throughout the Europa League campaign so I fully expect Chelsea’s number one to start in the final ahead of Willy Caballero.

Defence: Chelsea will continue to be without Antonio Rudiger as he’s recovering from knee ligament damage while Gary Cahill has been frozen out of the squad so Andreas Christensen is expected to keep his place alongside David Luiz in the middle of the back four.

Cesar Azpilicueta is certain to start at right-back with Davide Zappacosta dropping out following a rare run out during the draw with Leicester on the final day of the Premier League season. Marcos Alonso played at the King Power but I think Emerson Palmeiri may get the nod at left-back against Arsenal tomorrow night.

Midfield: N’Golo Kante is a major doubt for Chelsea after suffering a knee injury over the weekend. Sarri rated the midfielder as 50/50 during his press conference today but Kante failed to take part in training with the rest of the squad this evening. The Frenchman did some exercises with the physio but reporters present at the open training session said he didn’t look fit and only did about 30 minutes of work so it seems highly unlikely he’ll be fit to start tomorrow.

Ruben Loftus-Cheek is also ruled out after suffering an Achilles injury during a post-season friendly in Boston last week so Sarri has limited options in the middle of the park. Jorginho is therefore expected to be joined by Mateo Kovacic and Ross Barkley in midfield.

Attack: Chelsea are likely to make changes in attack with Olivier Giroud expected to be recalled up front meaning Gonzalo Higuain will drop to the bench. Giroud has a great record in the Europa League this season and Sarri hinted at his press conference today that the Frenchman would start in attack.

Eden Hazard will obviously be recalled after being rested against Leicester last time out and Chelsea will be looking to their talisman for inspiration against Arsenal in what could be his final game for the club amid speculation over a move to Spain this summer.

Callum Hudson-Odoi is ruled out with an Achilles injury so there is one place to fill in attack. Pedro is likely to get the nod over Willian so the Spaniard could join Hazard and Giroud in the Chelsea front three.

CHECK OUT OUR PREDICTED ARSENAL XI 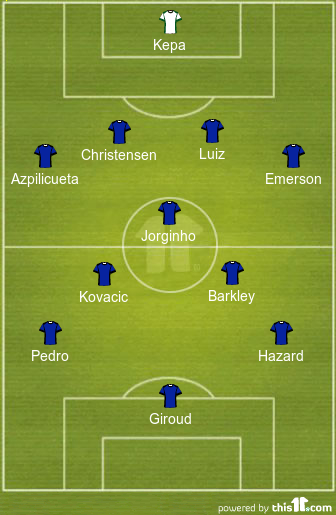