Chelsea take on Leicester City at Stamford Bridge on Sunday afternoon. Here is the team we expect Frank Lampard to select for the game:

Chelsea will be desperate to bounce back from their defeat to Man Utd when they take on Leicester City at Stamford Bridge on Sunday afternoon.

Goalkeeper: Kepa Arrizabalaga has conceded six goals in two games so far this season but the Spaniard is Chelsea’s established number one so he’s expected to retain his place between the sticks tomorrow with Willy Caballero on the bench.

Defence: Antonio Rudiger is on the verge of being back in contention after building up his fitness in training this last week but Lampard may be reluctant to throw him straight back into action so a place on the bench may be the best he can hope for tomorrow.

Therefore, Kurt Zouma is expected to keep his place alongside Andreas Christensen in the middle of the back four despite giving away a cheap penalty during the 2-2 draw with Liverpool in the Super Cup on Wednesday night.

Cesar Azpilicueta will continue at right-back with Reece James injured and Davide Zappacosta out of favour while Emerson seems to be Lampard’s first choice ahead of Marcos Alonso at left-back.

Midfield: Chelsea played 4-3-3 against Liverpool but we may see them switching to 4-2-3-1 again tomorrow afternoon. N’Golo Kante showed no signs of any injury problem in midweek as he put in a superb performance in the Super Cup so he should keep his place alongside Jorginho.

Mateo Kovacic started on Wednesday but Mason Mount impressed off the bench so I think the youngster could be recalled against Leicester in the advanced midfield role. Ross Barkley is another option for Lampard but Ruben Loftus-Cheek remains out with a long-term Achilles injury.

Attack: Olivier Giroud got on the score-sheet against Liverpool but the Frenchman may find himself back on the bench tomorrow with Tammy Abraham coming back into the starting eleven to lead the line for Chelsea.

Christian Pulisic has impressed so he could retain his place in attack ahead of the likes of Kenedy while Willian may only be deemed fit enough for a place among the substitutes having only recently returned to full training.

Pedro has started each of Chelsea’s two games so far this season and the Spaniard is expected to once again line-up on the right side of attack tomorrow. 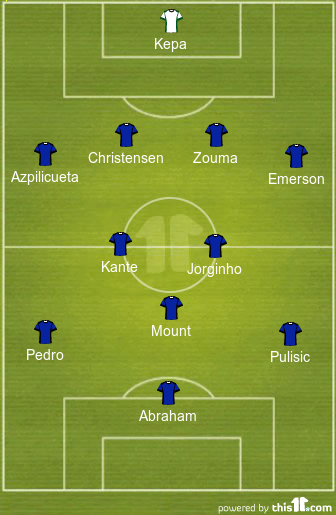