Manchester United take on Wolves at Molineux on Monday night. Here is the team we think Ole Gunnar Solskjaer will select:

Manchester United will be looking to build on their impressive win over Chelsea when they take on Wolves at Molineux on Monday night. Here is the team we think Ole Gunnar Solskjaer will select:

Goalkeeper: There is no debate over who’ll start in goal as David De Gea is certain to retain the gloves tomorrow night.

Defence: Man Utd splashed out around £130m on two new defenders in the summer and it appears to have been money well spent as both Harry Maguire and Aaron Wan-Bissaka impressed during a 4-0 win over Chelsea last weekend.

Maguire made a huge difference at the heart of the United back four and will look to form a rock solid partnership with Victor Lindelof this season while Wan-Bissaka carried over his fine form from Crystal Palace last season.

Luke Shaw is expected to keep his place at left-back meaning Ashley Young will have to settle for a place among the substitutes where he could be joined by Chris Smalling, Axel Tuanzebe or Phil Jones. However, Eric Bailly remains out with a knee injury.

Midfield: Paul Pogba put speculation surrounding his future to one side and produced a fine performance against Chelsea last weekend so Solskjaer will be looking for more of the same from the Frenchman at Wolves.

Scott McTominay is taking his chance to cement himself in the Man Utd midfield and he’s expected to continue alongside Pogba tomorrow night with Nemanja Matic once again having to settle for a place on the bench.

Fred is edging closer to full fitness so he may be named among the substitutes while we could see Andreas Pereira dropping out despite a decent display last weekend. Jesse Lingard is tipped to move into a more central role to accommodate for Daniel James out on the wing.

Attack: The teenager made a dream debut off the bench against Chelsea as he came on to score the fourth goal and you could tell how much it meant to him. I think we’ll see Solskjaer rewarding the youngster with a full Premier League debut tomorrow.

Marcus Rashford was superb against Chelsea with a well taken brace and he’s certain to keep his place while Anthony Martial is expected to also retain his place in the attack after getting himself on the score-sheet. Rashford may start from out wide with Martial through the middle but they will interchange throughout the game.

Alexis Sanchez has been building up his fitness in training over the past fortnight but he’s still lacking match practice so a place on the bench is the best he can hope for – although Mason Greenwood may still get the nod after impressing in pre-season. Juan Mata is another player who may have to settle for a place on the bench. 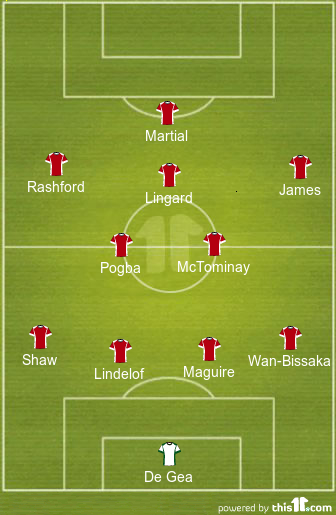