Liverpool take on Burnley at Turf Moor on Saturday evening. Here is the team we expect Jurgen Klopp to select for the game:

Liverpool will look to maintain their perfect start to the new season when they take on Burnley at Turf Moor on Saturday evening. Here is the team we expect Jurgen Klopp to select for the game:

Goalkeeper: Liverpool will continue to be without Alisson Becker as the Brazilian is still nursing a calf injury so Adrian will once again deputise between the sticks this weekend.

Defence: Trent Alexander-Arnold was excellent against Arsenal and no doubt he’ll retain his place as he’s a vital part of Liverpool’s system while the same can be said of Andy Robertson at left-back so I don’t think we’ll see any changes in the full-back positions.

However, we could see Klopp make one change in the middle of the back four with Joe Gomez pushing for a recall. The 22-year-old started against Norwich on the opening weekend and although Joel Matip has done very well since coming into the side, I wouldn’t be surprised to see Gomez given another run out alongside Virgil van Dijk on Saturday.

Midfield: Liverpool’s midfield were superb against the Gunners last time out but Klopp likes to rotate his trio in the middle of the park so we could see a couple of changes against Burnley.  Fabinho was outstanding last weekend so I think he’ll keep his place but James Milner could come in for Jordan Henderson.

Alex Oxlade-Chamberlain will be looking to celebrate his return to the England squad and Klopp may give the former Arsenal man a recall with Gini Wijnaldum given a breather. Adam Lallana is another option for Klopp but I think he’ll have to settle for a place on the bench once again.

Attack: Liverpool’s front three tore Arsenal apart again last weekend and they could have scored more than the three goals they managed to register if they’d taken their chances.

I really don’t see Klopp leaving any of his attackers out so Mohamed Salah is expected to keep his place and he’ll be looking to build on his brace from last time out while Sadio Mane is likely to join the Egyptian in the starting eleven.

Roberto Firmino may have only scored once so far this season but the Brazilian is vitally important to Klopp’s system and I expect him to lead the line with the likes of Xherdan Shaqiri and Divock Origi having to settle for places on the bench. 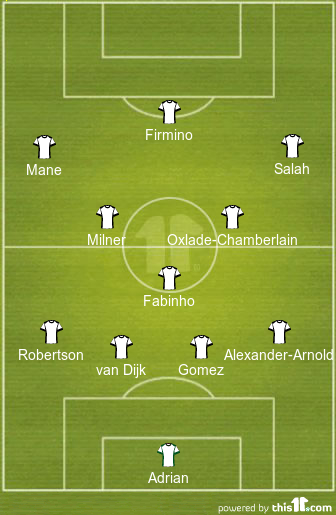