Chelsea take on Sheffield United at Stamford Bridge on Saturday afternoon. Here is the team we expect Frank Lampard to select for the game:

Chelsea will be looking to build on their win at Norwich when they take on Sheffield United at Stamford Bridge on Saturday afternoon. Here is the team we expect Frank Lampard to select for the game:

Goalkeeper: There is no point debating for too long over who’ll start in goal for Chelsea as Kepa Arrizabalaga is certain to keep his place between the sticks so Willy Caballero will settle for a place on the bench once again.

Defence: Antonio Rudiger is pushing for a recall after building up his fitness with the U23s so Lampard could give the German his first start of the new season. Andreas Christensen appears to have cemented himself in Lampard’s starting eleven so Kurt Zouma could be the man to drop out if Rudiger is recalled as the Frenchman’s form has been inconsistent so far this campaign.

Cesar Azpilicueta will continue at right-back as Davide Zappacosta has secured a move back to Italy and Reece James is still working his way back to full fitness while Emerson has established himself as Lampard’s first choice ahead of Marcos Alonso at left-back.

Midfield: N’Golo Kante is a major doubt for the game after missing the 3-2 win at Norwich City last weekend with an ankle injury. Lampard suggested earlier this week that the Sheffield United game may come too soon for Kante and he wasn’t included in France’s squad for their upcoming qualifiers so it looks like he’ll miss out this weekend.

Therefore, Mateo Kovacic is expected to keep his place in the middle of the park alongside Jorginho and Mason Mount was excellent once again last weekend. He’s been rewarded with a call-up to the senior England squad so I expect him to start in the advanced attacking midfield position for Chelsea on Saturday afternoon.

Lampard might be tempted to play a 4-2-3-1 formation at home on Saturday having tinkered with 4-3-3 which could see Ross Barkley miss out. Ruben Loftus-Cheek is still out with a long-term Achilles injury.

Attack: Tammy Abraham should keep his place up front after scoring a well taken brace against Norwich so Olivier Giroud may have to settle for a place among the substitutes.

Christian Pulisic is expected to keep his place on the left side of attack but Pedro remains a major doubt with a thigh injury that kept him out of the Norwich game. Callum Hudson Odoi is also still unavailable so Willian could be in-line for a recall. 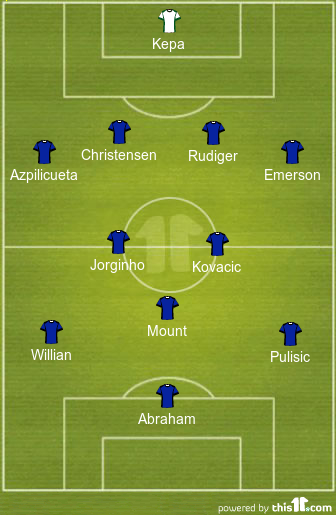