After the disappointment at Anfield last Saturday where the Gunners lost 3-1 to the European Champions, the fixtures do not get any easier for Unai Emery’s men. This Sunday Arsenal face arch rivals Tottenham at the Emirates Stadium.

Being a derby, this game is sure to be full of high intensity cupped alongside a booming crowd. However, while the fans are gearing up to obtain bragging rights, Emery has some tough decisions to make to ensure a home win.

After a mixed performance using the 4-1-2-1-2 diamond against Liverpool, most pundits expect the Spaniard to revert to one of his more featured formations. 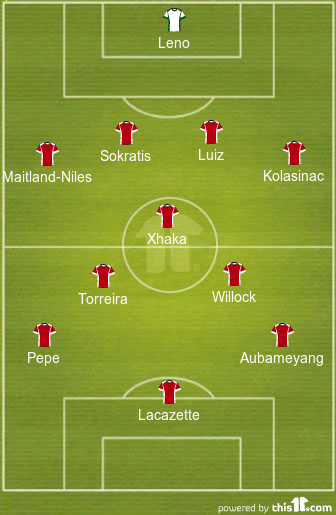 The 4-3-3 is the formation which Arsenal fans are keen to see as they patiently wait for Pepe, Aubameyang and Lacazette (PAL) to start together.

Emery revealed on Thursday that Lacazette has been struggling with an ankle problem but is ‘looking very positive’, therefore, could this finally be the fixture where the formidable three are unleashed?

In terms of the midfield, it appears that whenever fully fit Granit Xhaka slots straight into the team and after an impressive performance from the bench, Lucas Torreria should be confident in having earned a spot in the starting eleven.

Similarly Willock was trusted with a tough task against Liverpool and while the system may not have been fully effective, no one could doubt the young Englishman’s effort. Consequently, there’s no reason he should be dropped, unless Emery favours Ceballos after an impressive debut at the Emirates against Burnley.

At the back, although David Luiz made a fatal error against Liverpool, it can be assumed Emery will continue to trust his experience and passing ability and Sead Kolasinac is expected to come-in at left-back after Nacho Monreal joined Real Sociedad earlier today. 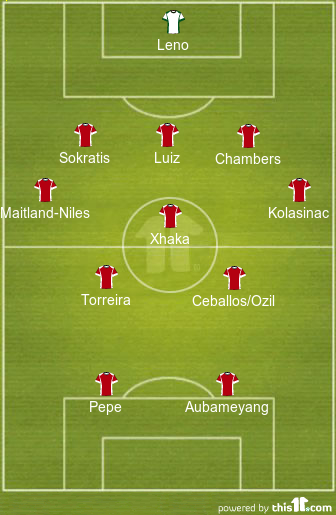 By now it is common knowledge that Emery is hoping to build his Arsenal side around a back four. However, with the departure of Monreal and Kieren Tierney not fully fit, it leaves the club with only Sead Kolasinac as the left back option.

While Kolasinac has many positive attributes going forward with the ball, he leaves a fair amount to be desired when defending.

Therefore, Emery could decide to slot in Calum Chambers – who impressed against Burnley – and use Kolasinac and Maitland Niles as attacking full backs. The potential for this formation to be used increases when you consider Tottenham are going through a right back crisis of their own.

Emery has made it clear that he is a pragmatic manager and rather than focusing on Arsenal’s strengths, he could concentrate more on Tottehnham’s weaknesses.

By playing five at the back it would mean three strong centre backs focusing on Harry Kane, and then leave the Kolasanic and Maitland-Niles to deploy their pace in attacking areas.

The midfield anchor of Torerria and Xhaka appears the most likely, and although Ceballos’s tenacious attitude is perfect for a derby, could Unai Emery shock everyone and give Mesut Ozil his first start of the campaign?

Up top, if Lacazette isn’t fully fit, Emery may look to further establish the attacking partnership between Pepe and Aubameyang which would also allow Luiz and Xhaka to play those floating through pulls to put the Tottenham defence under threat. 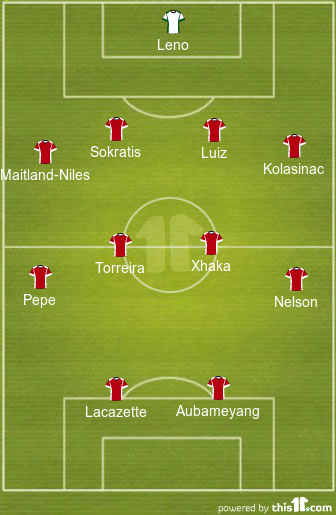 After Emery pulled a curve ball last week, it would feel negligent to not consider one of our own. A simple 4-4-2 may appear mundane but with the numerous versatile options at Emery’s disposable, it’s a formation which could be really effective and allow Arsenal to be compact without possession and attack on the break with speed and power.

The back four would be settled with Xhaka and Torreria focusing on winning the ball back and shielding the defence. However, once they make those vital tackles, they have the options of three blisteringly quick attacks in Pepe, Lacazette and Aubameyang.

In regards to the left midfielder, it wouldn’t be a huge surprise to see Reiss Nelson get the opportunity in such an important fixture. An Arsenal fan through and through, Emery could trust his young winger to understand the importance of the fixture and work his socks off.

Similarly, after being deployed in a similar position, Willock could also be tasked with playing in unfamiliar waters for the second week running. Emery’s shown he has complete trust in Willock so it would come as no surprise.

As well as Willock, Ceballos or even Ozil could be considered to perform on the left hand side of midfield. However, the role would come with a responsibility to track back and offer defensive support. In truth, it sounds like the perfect role for Alex Iwobi. However, the young Nigerian has departed and Emery cannot have complaints about the players to choose from.

It’s a North London derby and whoever Emery trusts to line up at the Emirates on Sunday afternoon, he’ll be expecting the bare minimum of maximum effort.

With Tottenham losing at home to Newcastle and drawing away to Man City prior to that, Arsenal have a real opportunity to dent their rivals start to the season. As well as that, a win for the reds would certainly make an early statement in their quest for the top four.

Things move quickly in football, however, derby results linger longer than most.  Whatever eleven Emery opts for, it’s sure to be a feisty game and hopefully ending with an Arsenal win.