Liverpool take on Napoli at the Stadio San Paolo on Tuesday night. Here is the team we expect Jurgen Klopp to select for the game:

Liverpool begin the defence of their Champions League trophy when they take on Napoli at the Stadio San Paolo on Tuesday night. Here is the team we expect Jurgen Klopp to select for the game:

Goalkeeper: Alisson Becker is still a month away from his return from a serious calf injury. Ideally, Klopp would protect Adrian for the upcoming Premier League games but I don’t see him throwing Caoimhin Kelleher or Andy Lonergan into the fray against a side like Napoli so he’ll have to stick with the former West Ham stopper.

Defence: Andy Robertson is a major doubt for the game tomorrow after failing to train on Monday morning due to a minor knock that he picked up during the win over Newcastle at the weekend. Robertson will be given a late fitness test but I don’t think Liverpool will take any risks with him so James Milner could start at left-back.

Klopp may have been tempted to give Trent Alexander-Arnold a rest against Napoli but if Robertson is ruled out then I don’t think the Liverpool boss will want to be without both his starting full-backs. However, we could see Joe Gomez come in for Joel Matip alongside Virgil van Dijk in the middle of the back four.

Midfield: Naby Keita is back in training as he looks to return from a groin injury that’s hampered him all season but the midfielder hasn’t travelled to Italy so he’ll have to wait a little while longer to make his comeback.

Fabinho will retain his place in the holding role while Gini Wijnaldum should also start in midfield but we could see Liverpool skipper Jordan Henderson recalled after being named on the bench at the weekend.

Alex Oxlade-Chamberlain would be the man to make way despite his decent showing against Newcastle while Adam Lallana may have to once again settle for a place on the bench tomorrow night.

Attack: Roberto Firmino changed the game for Liverpool when he came off the bench against Newcastle and the Brazilian star is expected to be given a recall against Napoli as Divock Origi has been ruled out. The Belgian was forced off on Saturday with an ankle injury and Klopp has confirmed Origi has been ruled out for a couple of weeks so he hasn’t made the trip to Italy.

Mohamed Salah should retain his place in the Liverpool attack while Sadio Mane showed once again why he’s become a crucial player for Klopp after scoring a brace on Saturday so the Senegalese international should also keep his spot.

Rhian Brewster has been drafted into the squad in place of Origi but a place on the bench is probably the best the youngster can hope for while Xherdan Shaqiri is also likely to settle for a place among the substitutes. 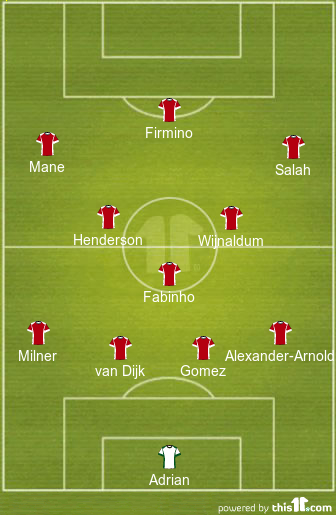