Tottenham take on Leicester City at the King Power on Saturday afternoon. Here is the side we think Mauricio Pochettino will select for the game:

Tottenham will be looking to get back to winning ways when they take on Leicester City at the King Power on Saturday afternoon. Here is the side we think Mauricio Pochettino will select for the game:

Goalkeeper: There isn’t much debate over who’ll start in goal as Hugo Lloris is almost certain to continue between the sticks with Pablo Gazzaniga once again on the bench.

Defence: Davinson Sanchez returned from injury to play at right-back during the 2-2 draw at Olympiakos on Wednesday night but the Colombian international struggled in the unfamiliar position. Kyle Walker-Peters is available again after overcoming a hamstring problem so I expect he’ll be recalled this weekend.

Toby Alderweireld should continue alongside Jan Vertonghen in the middle of the Tottenham back four while Danny Rose is set to be recalled in place of Ben Davies at left-back after being rested for the Champions League trip to Greece.

Juan Foyth is back in full training after an ankle problem but is still lacking fitness so he may not be risked against Leicester while Ryan Sessegnon didn’t make the travelling squad for the Olympiakos game as he looks to build on his fitness following a hamstring injury.

Midfield: Tottenham are likely to make a change in midfield as Tanguy Ndombele didn’t look 100% fit last time out having recently recovered from a hamstring injury so I expect the Frenchman will drop out at Leicester.

Eric Dier and Victor Wanyama are pushing for recalls but I think it will be Moussa Sissoko who comes back in to the Tottenham side to partner Harry Winks in the middle of the park. Giovani Lo Celso remains out with a groin injury.

Attack: Christian Eriksen had an off night against Olympiakos so I wouldn’t be surprised to see the Danish international given a breather this weekend with Dele Alli starting in the advanced attacking midfield role.

Heung-min Son should expect a recall after being named on the bench in Athens while Erik Lamela is also likely to feature as Pochettino looks to freshen things up in the Tottenham attack.

Lucas Moura will feel unfortunate if he drops out after scoring a fine goal against Olympiakos but I do think he’ll make way while Harry Kane is certain to keep his place up front for Spurs. 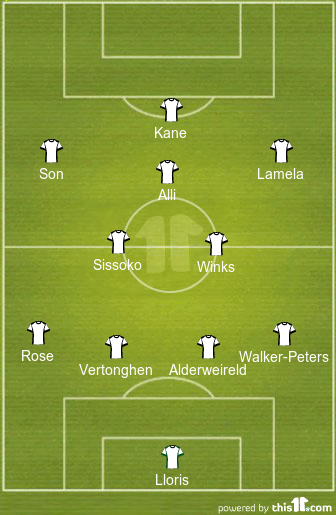