Manchester United take on AZ Alkmaar in the group stages of the Europa League on Thursday. Here is the team we think Ole Gunnar Solskjaer will select:

Manchester United take on AZ Alkmaar in the group stages of the Europa League on Thursday evening. Here is the team we think Ole Gunnar Solskjaer will select:

Goalkeeper: The Man Utd boss will continue to rotate his goalkeepers in the Europa League so Sergio Romero will replace David De Gea between the sticks.

Defence: Solskjaer will make changes at the back too but he’ll be without Aaron Wan-Bissaka and Phil Jones due to injuries so his options are restricted. Diogo Dalot is available again after recovering from a knock so he could start at right-back.

Youngster Brandon Williams is in the squad but I think Marcos Rojo will start at left-back while Axel Tuanzebe should move into the middle of defence. I expect one of Harry Maguire and Victor Lindelof to be rested.

Midfield: Man Utd will be without the services of Paul Pogba as the Frenchman has been ruled out of the trip to Holland with an on-going ankle problem. He started against Arsenal on Monday night but appears to have aggravated the injury and is now needing to rest.

Scott McTominay was excellent against the Gunners earlier this week but he should be rested against AZ with Nemanja Matic being recalled. Fred is also expected to be recalled for Man Utd with Pogba ruled out.

Angel Gomes is back in the squad but he may have to make-do with a place on the bench as Juan Mata should be recalled to start in the attacking midfield position.

Attack: Marcus Rashford was rushed back to start against Arsenal on Monday after recovering from a groin injury but I think he’ll be given a rest tomorrow night with Mason Greenwood coming in up front. The teenager scored against Astana in the first group game so he’ll be looking to take his chance once again tomorrow.

Jesse Lingard is expected to be recalled after being on the bench last time out while youngster Tahith Chong could also be given another chance to impress in the Man Utd attack.

Daniel James and Andreas Pereira may drop to the bench but Anthony Martial is still unavailable due to a thigh injury that’s hampered him in recent weeks. 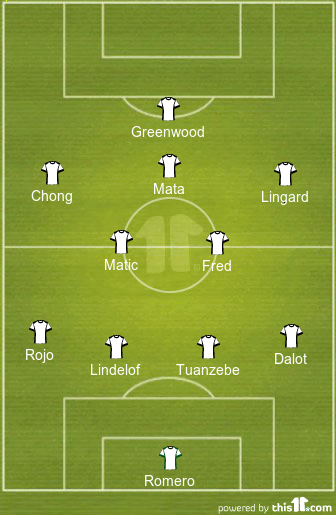