Tottenham take on Liverpool at Anfield on Sunday afternoon. Here is the side we think Mauricio Pochettino will select for the game:

Tottenham will be looking to bring home a positive result when they take on Premier League leaders Liverpool at Anfield on Sunday afternoon. Here is the side we think Mauricio Pochettino will select for the game:

Goalkeeper: Hugo Lloris has once again been ruled out with a dislocated elbow so Paulo Gazzaniga will continue between the sticks against Liverpool this weekend.

Defence: Pochettino is expected to stick with a flat back four at Anfield but he may make a couple of changes from the side that thrashed Red Star Belgrade 5-0 in the Champions League on Tuesday night.

Toby Alderweireld is set for a recall after being rested in midweek so Davinson Sanchez is the man most likely to make way with Jan Vertonghen keeping his place in the middle of the Tottenham defence.

Juan Foyth is hoping to feature after making his comeback from injury but Serge Aurier is likely to retain his spot at right-back. Ben Davies impressed on Tuesday but Danny Rose is expected to be recalled after being rested against Red Star.

Midfield: Tanguy Ndombele put-in an excellent performance in the Champions League so Tottenham’s big-money summer signing should keep his place in midfield against Liverpool this weekend.

Harry Winks was rested in midweek so he’s likely to be recalled with Dele Alli the man expected to make way despite his return to form in the Champions League as Moussa Sissoko should keep his place in the Spurs midfield.

Giovani Lo Celso made his comeback from injury with a sub appearances in midweek but he’ll have to settle for a place on the bench again at Anfield. Ryan Sessegnon is edging closer to being available for selection as he looks to return from a hamstring injury but the Liverpool trip might still come too soon.

Attack: Christian Eriksen was an unused substitute on Tuesday night so he’ll be hoping for a recall but I think Pochettino will leave the Danish international on the bench as his form has been inconsistent this season.

Erik Lamela deserves to keep his place in the Tottenham attack after an excellent performance against Red Star while Hueng-min Son should also start once again having scored a brace during the Champions League rout.

Therefore, Lucas Moura may have to settle for a place on the bench with Harry Kane certain to keep his place up front. The England hitman was back among the goals with a brace in midweek so he should be in confident mood against Liverpool on Sunday. 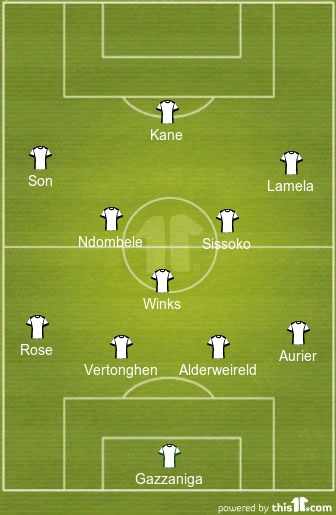