Manchester United take on Norwich City at Carrow Road on Sunday afternoon. Here is the team we think Ole Gunnar Solskjaer will select for the game:

Manchester United will look to build on their win over Partizan Belgrade with another positive result when they take on Norwich City at Carrow Road on Sunday afternoon. Here is the team we think Ole Gunnar Solskjaer will select for the game:

Goalkeeper: David De Gea was rested for the Europa League win in Serbia on Thursday night as Solskjaer didn’t want to risk his number one after he rushed back from a groin injury to take on Liverpool last weekend. However, De Gea will return in goal on Sunday with Sergio Romero making way.

Defence: Man Utd have gone with a back three/five in the last two games and it’s worked well so Solskjaer has suggested he’s ready to stick with the system this weekend. Victor Lindelof will come back into the defence after being rested on Thursday night.

Harry Maguire will retain his place in the back three while Marcos Rojo could start once again after putting in a solid shift against Partizan Belgrade. Phil Jones is another option for United but Rojo is perhaps more suited to playing on the left side of a back three.

Axel Tuanzebe is ruled out with a hip injury that he sustained in the warm-up before the Liverpool game last weekend but Aaron Wan-Bissaka should keep his place in the right wing-back position.

Brandon Williams was United’s best player on Thursday night and with Luke Shaw struggling with an on-going hamstring injury, you wouldn’t bet against the youngster making the left-back spot his own this season. However, Solskjaer may not want to put too much pressure on Williams so Ashley Young might be recalled this weekend.

Midfield: Man Utd will once again be without the services of Paul Pogba as the midfielder continues to overcome a foot injury which has hampered in recent weeks and Nemanja Matic is also ruled out as he’s in Dubai recovering from a muscle issue.

Scott McTominay will once again start in midfield for United but we could see Fred given a recall after he was named on the bench on Thursday night. James Garner is the man likely to make way.

Attack: Solskjaer has hinted he’s ready to play a front two after Anthony Martial made a successful return to the starting eleven with the winning goal against Partizan Belgrade on Thursday night.

Marcus Rashford will be recalled after being a sub in the Europa League clash and Solskjaer has suggested he could play the England international alongside Martial at Norwich this weekend.

If Solskjaer decides to go with a 3-4-1-2 formation then that could be bad news for Daniel James as he’s unlikely to get a starting spot at Norwich while Mason Greenwood will also have to settle for a place on the Man Utd bench.

However, Jesse Lingard should keep his place in the advanced midfield role – although Juan Mata and Andreas Pereira are other options for Solskjaer. 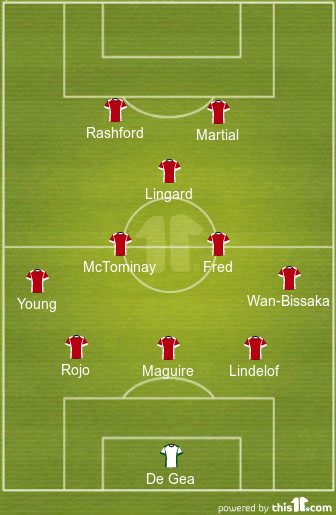