Liverpool are back in Champions League action when they take on Genk at Anfield on Tuesday night. Here is the team we expect Jurgen Klopp to select

Liverpool are back in Champions League action when they take on Genk at Anfield on Tuesday night. Here is the team we expect Jurgen Klopp to select for the game:

Goalkeeper: Alisson Becker is expected to once again keep goal for Liverpool with Adrian having to settle for a place on the bench.

Defence: Liverpool have a huge Premier League showdown with Manchester City on Sunday and Klopp has hinted he’ll make changes to his squad tomorrow night so I expect a few key players to be rested.

Trent Alexander-Arnold put in an incredible shift against Aston Villa at the weekend so I wouldn’t be surprised if he’s given a breather with James Milner coming in at right-back while it would make sense not to risk Virgil van Dijk ahead of the City clash.

Joel Matip remains out with a knee injury so Joe Gomez could be recalled to start alongside Dejan Lovren while Andy Robertson should retain his place at left-back as Klopp won’t want to make too many changes.

Midfield: Liverpool have plenty of options in midfield so I expect Klopp to rotate his side ahead of the Man City game with Jordan Henderson and Gini Wijnaldum both rested against Genk.

Naby Keita’s knock that he picked up last week wasn’t as serious as first though and he made the bench against Villa on Saturday so the Guinean international could be recalled to the starting eleven tomorrow night.

Alex Oxlade-Chamberlain is also likely to be recalled and he’ll be looking to build on an excellent performance against Arsenal in the Carabao Cup last week. Fabinho is also expected to come back into the holding role for Liverpool after not being risked against Villa in fear of him picking up a fifth booking. Adam Lallana is the man set to make way against Genk.

Attack: Liverpool put four past Genk in the reverse fixture two weeks ago so they should be confident of easing past them on home soil. Therefore, Klopp is likely to take this opportunity to rest at least one of his front three.

Mohamed Salah has been carrying a niggling ankle injury in recent weeks so I think it’s highly unlikely he’ll start against Genk as Klopp will want to ensure he’s 100% fit to face Manchester City at the weekend.

Divock Origi is pushing for a recall so the Belgian international may is expected to start tomorrow with Roberto Firmino once again leading the line up front for Liverpool. Xherdan Shaqiri remains out with a calf problem so Sadio Mane may start – although Klopp may take him off at the earliest opportunity if/when the game is in the bag. 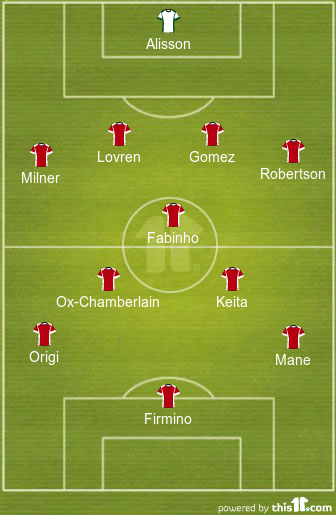