This is our match preview ahead of Arsenal’s Europa League clash with Vitoria in Portugal including team news, line-ups and prediction

Arsenal can virtually guarantee qualification to the knockout stages of the Europa League with victory over Vitoria in Portugal this afternoon [3.50pm kick-off].

The Gunners have endured a tough few weeks as they fell further behind in the race for the top four after being held to a 1-1 draw by Wolves at the weekend which has left them sitting fifth in the Premier League table – six points adrift of fourth-placed Chelsea.

However, it’s European matters at hand today and Arsenal’s form in the Europa League has been a rare positive for Unai Emery this season as the north Londoners sit top of Group F on a maximum nine points from their three games.

Another victory over bottom-placed Vitoria this afternoon would move Arsenal on to 12 points and book their place in the knockout stages of the competition with two games to spare if Standard Liege fail to beat Eintracht Frankfurt in Belgium tomorrow.

The game is being played on Wednesday afternoon because Vitoria’s local rivals Braga host Besiktas tomorrow so police would have been unable to cope with both games being played on the game day. In addition, Europa League games can’t clash with Champions League matches so the Arsenal fixture needs to be an early kick-off.

Arsenal have left Granit Xhaka back in London after stripping him of the captaincy following his bust-up with the fans recently so the Swiss international’s long-term future at the club is in serious doubt.

Mesut Ozil, David Luiz, Calum Chambers and Pierre-Emerick Aubameyang have also not made the trip to Portugal after being given a rest but Reiss Nelson is back in contention after recovering from a knee injury.

Emile Smith Rowe has been ruled out with a minor calf complaint but Emi Martinez, Sead Kolasinac, Rob Holding, Shkodran Mustafi, Joe Willock, Bukayo Saka and Gabriel Martinelli are all set for recalls.

Hector Bellerin and Nicolas Pepe are also expected to start after not featuring against Wolves last weekend while Lucas Torreira and Dani Ceballos could line-up in midfield. 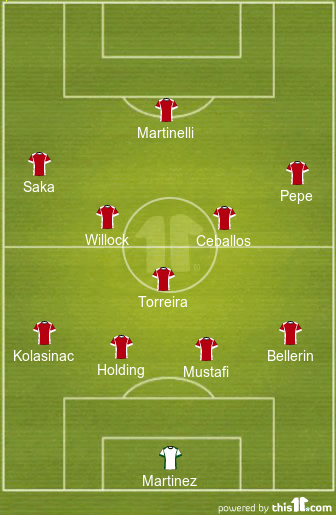 Vitoria 1-2 Arsenal: Vitoria gave Arsenal a real scare at the Emirates as the Gunners needed two late free-kicks from Nicolas Pepe to secure a 3-2 victory in the reverse fixture two weeks ago so Emery won’t be underestimating the task at hand. Arsenal also have a poor record in Portugal as they’ve only won one of their seven away games against Portuguese sides so I don’t think this will be an easy game. However, Arsenal have a far stronger team and I expect their quality to come through in the end. I’m going for a narrow away win.