This is our match preview ahead of Tottenham’s Champions League clash with Olympaicos including team news, line-ups and prediction

Jose Mourinho will take charge of his first Champions League game as Tottenham manager when they entertain Olympiacos this evening.

Mourinho replaced Mauricio Pochettino as Tottenham manager last week and the former Chelsea boss got his tenure off to a winning start with a hard fought 3-2 victory over West Ham at the London Stadium on Saturday afternoon.

The win moved Spurs up to 10th in the Premier League table, however, it’s European matters at hand tonight as Tottenham look to book their place in the knockout stages of the Champions League.

Spurs head into the game sitting second in Group B – five points adrift of Bayern Munich and four ahead of Red Star Belgrade – so a win over bottom-placed Olympiacos will guarantee their place in the last-16.

Tottenham have been boosted by the news that Jan Vertonghen has returned to full training after recovering from a hamstring injury that’s hampered him in recent weeks so he could be recalled in defence.

Tanguy Ndombele is also available again after overcoming a groin problem that he picked up during the international break so the French midfielder could come-in alongside Eric Dier this evening.

However, Spurs will be without Ben Davies after he picked up a knock against West Ham at the weekend so Danny Rose is set for a recall at left-back. Erik Lamela, Hugo Lloris and Michel Vorm all remain on the sidelines. 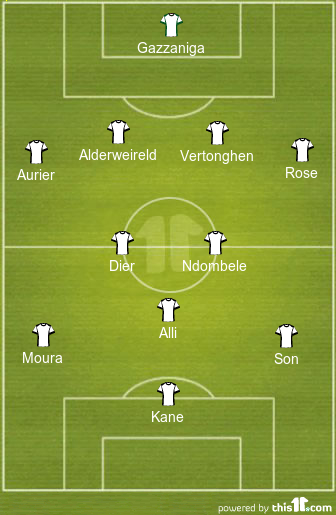 Tottenham 3-0 Olympaicos: Spurs threw away a two-goal lead to draw 2-2 in the reverse fixture in Greece but they’ll be confident of collecting all three points on home soil tonight. Olympiacos have a woeful away record in Europe as they’ve lost each of their last six Champions League away games and haven’t won on the road in their last 12 attempts.

I don’t see that record improving this evening as Tottenham should be far too strong for the Greek outfit. Mourinho will be keen to get qualification wrapped-up with minimal fuss and I think Tottenham will ease to a comfortable win tonight.