Tottenham take on Bayern Munich in their final Champions League group game this evening. Here is the side we think Mourinho will select for the game:

Tottenham are in Germany to take on Bayern Munich in their final Champions League group game this evening. Here is the side we think Jose Mourinho will select for the game:

Goalkeeper: Hugo Lloris is still on the sidelines recovering from a dislocated elbow and Michel Vorm is out with a calf problem so Paulo Gazzaniga will continue between the sticks this evening.

Defence: With qualification to the knockout stages already secured, Mourinho has decided to leave Jan Vertonghen and Serge Aurier back in north London. Toby Alderweireld has travelled but he could be given a rest with Juan Foyth coming in to partner Davinson Sanchez in the middle of the back four.

Ben Davies is still out with an ankle ligament injury so Danny Rose should start at left-back while youngster Kyle Walker-Peters is expected to get a chance to impress at right-back tonight.

Midfield: Tottenham will continue to be without Harry Winks as he’s still nursing an ankle injury which kept him out of the win over Burnley at the weekend while Tanguy Ndombele is also ruled out with a groin injury.

Eric Dier is likely to be given a breather as Mourinho has hinted Oliver Skipp will make a rare start in midfield. Moussa Sissoko could be the man to partner Skipp if the Spurs boss doesn’t want to call upon Victor Wanyama.

Attack: Mourinho has left Harry Kane and Dele Alli back in London to rest ahead of Sunday’s Premier League trip to Wolves so we’ll see changes in the Tottenham attack this evening.

Troy Parrott has been tipped to make a start up front and the Irish teenager will be desperate to make an impression in the Champions League having torn it up at youth level for Spurs.

Hueng-min Son should be rested while Lucas Moura may also get a breather. Erik Lamela remains out with a hamstring injury so Christian Eriksen should finally be recalled to make his first start under Mourinho.

Summer signing Giovani Lo Celso is also expected to be recalled in the Tottenham attacking midfield role while Ryan Sessegnon will be given a chance to impress. Mourinho has suggested the youngster is regarded as a winger for now rather than a left-back so we could see Sessegnon on the left side of the attack tonight. 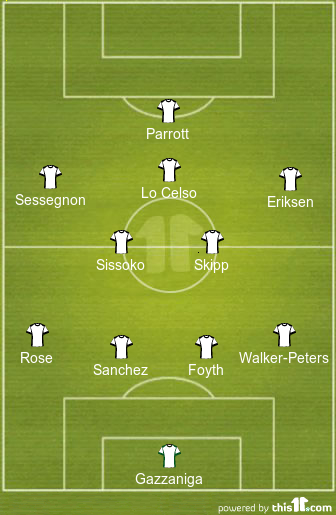