This is our match preview ahead of Man Utd’s clash with AZ Alkmaar at Old Trafford including team news, line-ups and prediction

United head into the game off the back of two excellent victories over Tottenham and Manchester City which have catapulted them up the Premier League table to fifth place and to within touching distance of the top four.

Those impressive wins have eased the pressure on Ole Gunnar Solskjaer’s shoulders and given United renewed hope they can qualify for the Champions League through the league having been 11 points adrift just weeks ago.

However, it’s European matters at hand today as Man Utd look to wrap-up top spot in Group L. Solskjaer’s men currently sit one point ahead of AZ Alkmaar and with both clubs qualified for the knockout stages, it’s a straight shoot-out for who comes first.

United will progress as group winners and secure an easier draw in the knockout stages if they win or draw this evening but defeat would see AZ leapfrog them into first place so it’s all to play for at Old Trafford.

Man Utd will be without Jesse Lingard as the midfielder picked up a knock during the win over City while Paul Pogba remains on the sidelines as he’s still lacking match fitness following a lengthy spell on the sidelines with an ankle injury.

Eric Bailly, Diogo Dalot and Tim Fosu-Mensah are also lacking match fitness while Marcos Rojo is still unavailable but Nemanja Matic is fit to return after recovering from a muscle issue that kept him out for two months.

Solskjaer is expected to rotate his squad ahead of Sunday’s league game with Everton so the likes of Sergio Romero, Ashley Young, Axel Tuanzebe, Phil Jones, Juan Mata and Andreas Pereira are set for recalls.

Youngsters James Garner, Mason Greenwood, Brandon Williams and Tahith Chong are also set for run-outs while Anthony Martial and Marcus Rashford are among those expected to be rested. 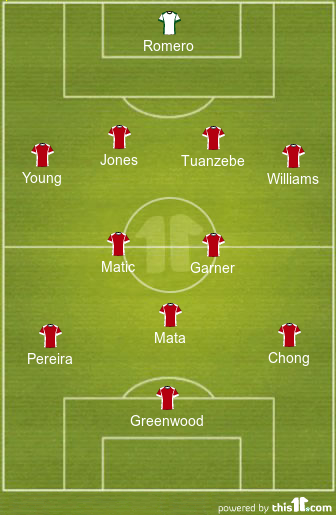 Man Utd 2-1 AZ Alkmaar: United drew the reverse fixture 0-0 in Holland and AZ have a woeful record in England having lost all five of their away games against Premier League sides. However, the Dutch side sit second in the Eredivisie and have won eight of their last nine games in all competitions so they shouldn’t be underestimated. I think AZ will give the hosts a tough game this evening and wouldn’t be surprised if they snatch a draw against a weakened United side, but I fancy Solskjaer’s men to edge it in a narrow 2-1 win.