Chelsea take on Nottingham Forest in the 3rd round of the FA Cup on Sunday afternoon. Here is the team we expect Frank Lampard to select

Chelsea take on Nottingham Forest at the City Ground in the 3rd round of the FA Cup on Sunday afternoon. Here is the team we expect Frank Lampard to select for the game:

Goalkeeper: Kepa Arrizabalaga is expected to be given a rest this weekend with Willy Caballero handed a rare start between the sticks.

Defence: Chelsea should freshen things up in defence with Andreas Christensen pushing for a recall having lost his first team place this season. Fikayo Tomori could return from a knock that kept him out of the draw at Brighton on New Years Day so Antonio Rudiger and Kurt Zouma should be rested.

Marcos Alonso remains out with a buttock injury but Emerson Palmeiri is in-line for a recall at left-back with Cesar Azpilicueta rested but Reece James could keep his place on the opposite side of the back four.

Midfield: Lampard should freshen things up in midfield so Ross Barkley is expected to make his first start since recovering from an ankle injury that he sustained back in October.

N’Golo Kante is likely to be rested while Mason Mount may drop to the bench with Mateo Kovacic recalled having been left out at Brighton. The Chelsea boss may be reluctant to change things up too much in the middle of the park so Jorginho could keep his place in the deep-lying role.

Attack: Tammy Abraham is expected to be given a well-earned rest so Michy Batshuayi is set for a rare start up front with Olivier Giroud still ruled out with an ankle knock.

I think we’ll see Willian given a rest so Pedro could come into the Chelsea starting eleven having struggled to make an impression this season while Callum Hudson-Odoi should replace Christian Pulisic on the left wing. 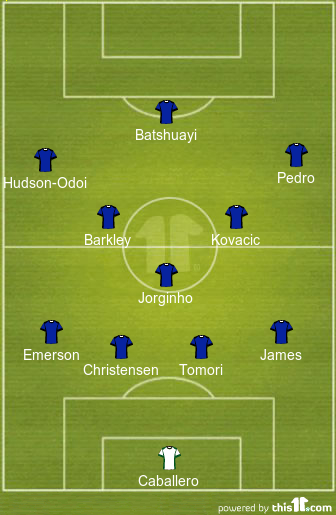