Tottenham welcome Premier League leaders Liverpool to north London on Saturday evening. Here is the side we think Jose Mourinho will select

Tottenham welcome Premier League leaders Liverpool to north London on Saturday evening. Here is the side we think Jose Mourinho will select for the game:

Goalkeeper: Hugo Lloris has stepped-up his recovery from an elbow injury after returning to light training but the Liverpool game comes too soon so Paulo Gazzaniga will continues between the sticks for Tottenham tomorrow.

Defence: Mourinho is expected to stick with a back three but he might make one change with Davinson Sanchez being recalled after being named on the bench for the FA Cup draw at Middlesbrough last weekend. Jan Vertonghen and Toby Alderweireld should keep their places in Mourinho’s starting eleven so Juan Foyth may have to settle for a place on the bench.

Ben Davies remains out with an ankle injury and while Danny Rose has returned to full training following a calf problem he may not be deemed match fit so Ryan Sessegnon could continue at left wing-back.

Kyle Walker-Peters is being linked with a move away from Tottenham this month so Serge Aurier should keep his place in the right wing-back position against Liverpool tomorrow.

Midfield: Tottenham have been dealt a blow ahead of the game with the news that Moussa Sissoko has been ruled out following knee surgery this week while Tanguy Ndombele remains out with a hip problem.

Eric Dier is likely to move back into midfield following his stint in defence which could see Harry Winks make way. Christian Eriksen is expected to keep his place in the Tottenham side with Giovani Lo Celso having to settle for a place among the substitutes.

Attack: Spurs were hit by a hammer blow on Thursday after it was confirmed Harry Kane has been ruled out until April with a serious hamstring injury so Mourinho has a huge problem to solve up front.

Hueng-min Son is the most man likely to fill-in while Spurs scour the market for a new striker so I expect the South Korean international to lead the line up front against Liverpool with Dele Alli offering support.

Lucas Moura is also expected to keep his place in the Tottenham attack so Erik Lamela may have to settle for a place on the bench tomorrow. 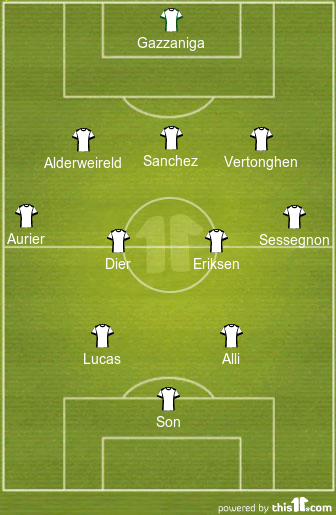