Tottenham take on Watford at Vicarage Road on Saturday lunchtime. Here is the side we think Jose Mourinho will select for the game:

Tottenham take on Watford at Vicarage Road on Saturday lunchtime. Here is the side we think Jose Mourinho will select for the game:

Goalkeeper: Hugo Lloris is back in full training after recovering from an elbow injury that’s kept him out since October, however, he’s not expected to feature tomorrow due to a lack of match fitness so Paulo Gazzaniga will continues between the sticks for Tottenham.

Defence: Mourinho should make a couple of changes in defence for the trip to Watford. Toby Alderweireld is expected to be recalled after being rested for the FA Cup third round reply win over Middlesbrough in midweek.

Davinson Sanchez should keep his place in the middle of the back four so Jan Vertonghen may move across to left-back to accommodate for Alderweireld’s return. That would mean Ryan Sessegnon making way.

Japhet Tanganga has broken into the first team set-up in recent games but I expect the youngster to drop back to the bench with Serge Aurier given a recall at right-back this weekend.

Midfield: Tottenham will continue to be without Moussa Sissoko as he’s facing a spell on the sidelines following knee surgery while Tanguy Ndombele remains out with a hip problem.

Eric Dier started against Middlesbrough in midweek but I think he may drop to the bench tomorrow with Christian Eriksen moving into a more central position alongside Harry Winks.

Attack: Dele Alli is certain to be recalled against Watford so Giovani Lo Celso may find himself dropping out of the starting eleven with Hueng-min Son brought back into the side after being rested in midweek.

Erik Lamela has looked sharp in recent games since returning to full fitness so the South American could keep his place in the Tottenham attack while Lucas Moura is expected to lead the line up front in the continued absence of Harry Kane – who’s facing a race against time to play again this season after under surgery on a serious hamstring injury. 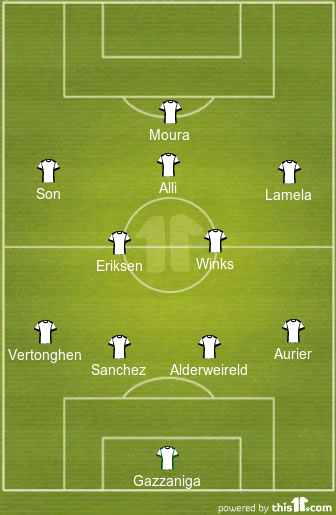