Goalkeeper: Alisson Becker has been outstanding for Liverpool all season and he’s certain to keep his place tonight with Adrian on the bench.

Defence: Joel Matip is back in contention after recovering from a knee injury but he’s been out for three months so Klopp is likely to ease him back into action. Dejan Lovren has returned to full training this week and could be in the squad but I think Klopp will wait to start him in the FA Cup fourth round at the weekend.

Therefore, Joe Gomez should continue alongside Virgil van Dijk in the middle of defence this evening while Trent Alexander-Arnold and Andy Robertson are expected to occupy the full-back positions once again.

Midfield: Liverpool were handed a major boost after Fabinho made his return with a cameo off the bench during last weekend’s 2-0 win over Manchester United at Anfield. The Brazilian intentional was in superb form before his injury and we could see him recalled to start in the holding role tonight.

Jordan Henderson has been in excellent form lately so he should keep his place in the middle of the park while Gini Wijnaldum is also expected to start once again so Alex Oxalde-Chamberlain may be the man to make way if Fabinho is recalled.

Oxalde-Chamberlain has put in some encouraging performance in recent games but Klopp may want to field a slightly more compact midfield away to a dangerous Wolves side so the former Arsenal man may have to settle for a sub role.

Naby Keita remains on the sidelines with a groin injury and James Milner is also still nursing a hamstring problem but Adam Lallana is another option from the bench for Liverpool if they need to freshen things up.

Attack: I don’t see Klopp resting any of his big-guns in attack this evening as they can all get the day off against Shrewsbury Town in the FA Cup at the weekend.

Therefore, I fully expect Mohamed Salah to start along with Sadio Mane with the fearsome duo supporting Roberto Firmino in the Liverpool front three against Wolves tonight.

January signing Takumi Minamino will be an option from the bench along with Divock Origi but Xherdan Shaqiri remains on the sidelines with shin injury. 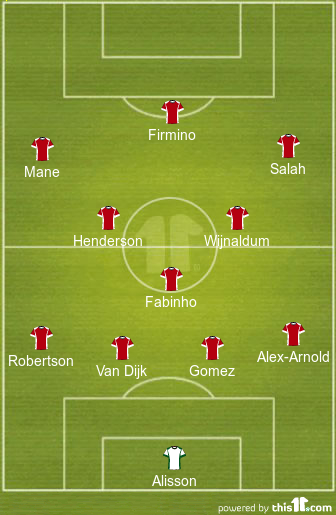