Chelsea take on Hull City at KCOM Stadium in the 4th round of the FA Cup on Saturday. Here is the team we expect Frank Lampard to select

Chelsea take on Hull City at KCOM Stadium in the 4th round of the FA Cup on Saturday afternoon. Here is the team we expect Frank Lampard to select for the game:

Goalkeeper: Kepa Arrizabalaga is expected to be rested this weekend so Willy Caballero will be recalled between the sticks after keeping goal for the win over Nottingham Forest in the previous round.

Defence: Chelsea are likely to rotate their squad with several of the players who started during the 2-2 draw with Arsenal on Tuesday night given a rest. Antonio Rudiger and Andreas Christensen are expected to make way with Kurt Zouma and Fikayo Tomori recalled in the middle of the back four.

Cesar Azpilicueta is also set for a breather and with Reece James a doubt with a knee injury, teenager Tariq Lamptey could start at right-back against Hull. Marcos Alonso is fit to return after recovering from injury so he may replace Emerson at left-back.

Midfield: N’Golo Kante and Jorginho could be given well deserved rests tomorrow with Ross Barkley and Mason Mount pushing for recalls after being named on the bench against Arsenal last time out.

Mateo Kovacic could be the man to keep his place in the middle of the park with the Croatian playing in a slightly deeper position against Hull on Saturday evening.

Attack: Tammy Abraham has been ruled out after suffering an ankle injury during the closing stages of the draw on Tuesday night. Lampard doesn’t know how serious the injury is yet but the striker won’t be available tomorrow.

Therefore, Michy Batshuayi is set to start up front for Chelsea while I expect Pedro to come in for Willian in attack. Christian Pulisic is still unavailable due to a groin injury so Callum Hudson-Odoi may keep his place in the front three. 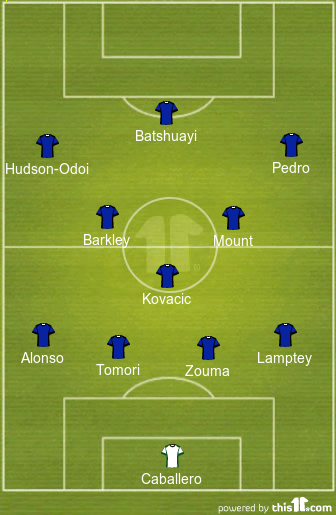