Liverpool take on Atletico Madrid at the Metropolitano Stadium on Tuesday evening. Here is the team we expect Jurgen Klopp to select for the game:

Liverpool take on Atletico Madrid in the first leg of their Champions League last-16 tie at the Metropolitano Stadium on Tuesday evening. Here is the team we expect Jurgen Klopp to select for the game:

Goalkeeper: There is no point mulling over who’ll start in goal. Alisson Becker has arguably been the best keeper on the planet over the past 18 months so he’ll start with Adrian on the bench.

Defence: Klopp is unlikely to tinker too much from a back four that’s been outstanding in recent months so we should see the same defence that lined-up during the 1-0 win at Norwich City on Saturday afternoon.

Joe Gomez has been superb in the middle of the back four recently so he deserves to keep his place alongside Virgil van Dijk tomorrow. That means Joel Matip and Dejan Lovren will battle for a spot on the bench.

Trent Alexander-Arnold and Andy Robertson are two of the best full-backs in world football so they’ll keep their places against Atletico and no doubt they’ll be key players once again for Liverpool.

Midfield: Klopp has a wealth of options in midfield as James Milner is fit again after making a successful return from a hamstring injury while Naby Keita put-in a solid shift at Carrow Road on Saturday so he’ll be hoping to keep his place.

However, I have a feeling Keita may drop to the bench alongside Milner against Atletico as Fabinho is pushing for a recall after being named among the substitutes at the weekend.

Jordan Henderson will no doubt keep his place as he’s been superb throughout the season while Gini Wijnaldum is expected to be retained meaning Adam Lallana may have to settle for a place on the bench once again.

Attack: Liverpool should make one significant change in attack as Sadio Mane is set for a recall after making a successful return from a thigh injury having come off the bench to score the winner against Norwich last time out.

The Senegal forward should take his place on the left side of the Liverpool attack and reform Klopp’s devastating attacking trio alongside Mohamed Salah and Roberto Firmino against Atletico Madrid.

That means Alex Oxalde-Chamberlain is the man most likely to make way despite his positive form of late. Divock Origi will also miss out while Takumi Minamino will hope to force his way back into the squad after not being involved at Norwich. 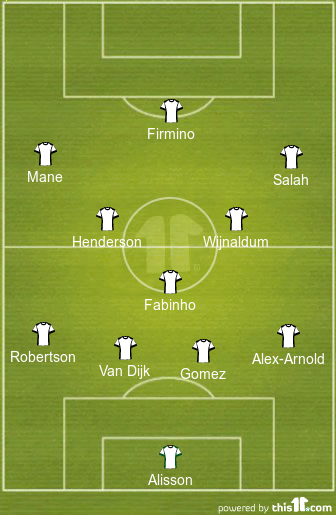