Liverpool take on West Ham at Anfield on Monday night. Here is the team we expect Jurgen Klopp to select for the game:

Liverpool will go one step closer to clinching the Premier League title when they take on West Ham at Anfield on Monday night. Here is the team we expect Jurgen Klopp to select for the game:

Defence: Klopp has played a settled back four for some time and he’s unlikely to change things up tomorrow night so I expect Joe Gomez to continue alongside Virgil van Dijk in the middle of the back four as the youngster has been excellent recently. Joel Matip and Dejan Lovren will therefore have to battle for places on the bench.

Liverpool have two of the best full-backs in world football so Klopp is expected to once again go with Trent Alexander-Arnold at right-back and Andy Robertson at left-back against West Ham.

Midfield: The Reds have been handed a blow with the news that Jordan Henderson has been ruled out for around three weeks with a thigh injury that he picked up against Atletico Madrid last week.

Naby Keita is pushing for a recall so he could come in for Henderson in the middle of the park tomorrow night while Klopp may opt to give Gini Wijnaldum a breather.

James Milner and Adam Lallana are options for Liverpool but I think it will be Alex Oxlade-Chamberlain who comes in if Wijnaldum is rested while Fabinho should continue in the holding role for the champions-elect.

Attack: Liverpool will continue to be without the services of Xherdan Shaqiri on Monday night as the Swiss international is taking longer than expected to overcome a niggling calf injury.

Takumi Minamino and Divock Origi are available for selection if Klopp wants to freshen things up in attack, however, Liverpool don’t play again until next weekend so they have plenty of time to recover ahead of Saturday’s trip to Watford.

Therefore, I expect the Reds boss to go with his strongest attack meaning Mohamed Salah and Sadio Mane will once again support Roberto Firmino in the front three against West Ham. 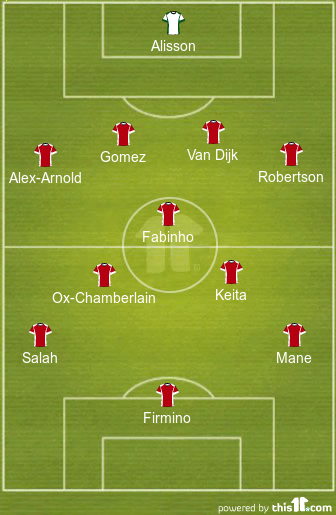