Goalkeeper: Arsenal No.1 Bernd Leno should once again start between the sticks meaning Emi Martinez will remain on the bench this weekend.

Defence: Hector Bellerin has been carrying a niggling groin problem recently but he’s been well rested having not started any of the last three games and I think the Spaniard will be recalled at right-back on Saturday.

Sokratis may have to settle for a place on the bench as Pablo Mari has impressed alongside David Luiz in the past two matches having kept consecutive clean sheets against Portsmouth and West Ham so I expect they’ll continue their partnership against Brighton.

Sead Kolasinac is still recovering from a shoulder injury but Kieran Tierney is back in contention after returning to full training recently. However, he still lacks match fitness and Bukayo Saka has excelled at left-back so I think the youngster will keep his place.

Midfield: Arsenal will continue to be without Lucas Torreira as the South American midfielder has been ruled out for several weeks with a fractured ankle that he sustained against Portsmouth.

Granit Xhaka should keep his place in midfield while Dani Ceballos is likely to start alongside the Swiss international as he’s impressed since breaking into the Arsenal starting eleven in recent weeks.

Matteo Guendouzi will probably have to settle for a place on the bench. Joe Willock may also be named among the substitutes as Mesut Ozil is expected to keep his place in the attacking midfield role, despite his poor showing against West Ham last time out.

Attack: Arsenal are expected to recall Alexandre Lacazette up front this weekend after he scored the winner off the bench against the Hammers. Young striker Eddie Nketiah will therefore make way.

Pierre-Emerick Aubameyang is set to continue on the left side of attack and Arsenal will be looking to the Gabon hitman to provide their main goal threat once again as he looks to boost his chances of winning the Golden Boot again this season.

I think we may see a change on the right wing with Nicolas Pepe dropping out. Gabriel Martinelli is pushing for a recall but he’s better on the left so we could see Reiss Nelson recalled as he’s put-in some encouraging displays recently. 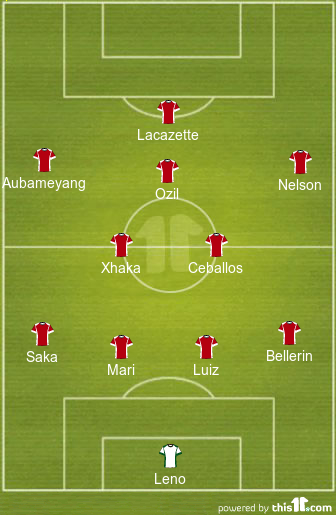