Premier League football returns tonight as Manchester City welcome Arsenal to the Etihad Stadium. Here is a preview ahead of the game

The match was originally scheduled to be played back in mid-March but was called-off after Gunners boss Mikel Arteta fell ill and it’s been a long three-month wait for the game to be finally given the go-ahead.

Man City go into the contest knowing the title is gone as Liverpool are a whopping 25-points clear at the top of the table so Pep Guardiola will be focused on wrapping-up second position during the final 10 games of the campaign.

Leicester currently sit four points back in third place but City can extend their advantage over the Foxes to seven points if they win their game in hand against Arsenal on home soil this evening.

However, Arsenal head to Manchester in desperate need of a positive result as they look to claw their way back into the fold for Champions League qualification following a turbulent year in north London.

The Gunners languish way down in ninth position in the Premier League table but can climb up to sixth and to within two points of fifth-placed Man Utd and five of fourth-placed Chelsea with victory over City tonight.

Guardiola has voiced his concern over the fitness of his squad heading into the game as he doesn’t feel he’s had enough time to prepare his players but the City boss hasn’t reported any fresh injuries.

Leroy Sane has been able to build-up his fitness over the past three months having recovered from a knee injury while Aymeric Laporte is also back in contention so Guardiola could have a fully-fit squad to choose from.

Arsenal have also used the enforced break to get some of their injured players back as Arteta has confirmed his squad is in good health. Lucas Torreira has been in training recently after recovering from an ankle injury that was meant to rule him out for the rest of the season.

Kieran Tierney is also available for selection after building-up his fitness during the past few months while Shkodran Mustafi and Sead Kolasinac have recovered from knocks.

Granit Xhaka is expected to shake-off a minor issue to start at the Etihad so the only major absentee for Arsenal is Calum Chambers – who’s still recovering from a knee ligament injury. 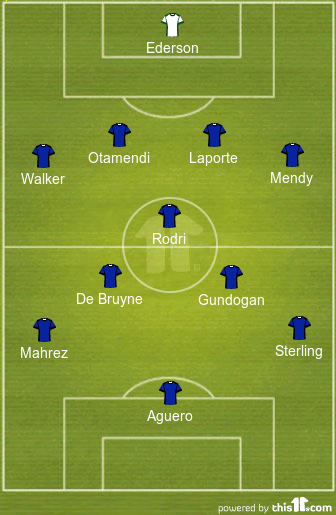 Man City 3-1 Arsenal: City won the reverse fixture 3-0 at the Emirates back in December and have dominated against Arsenal in recent years having won all six of the last meetings with an aggregate score of 17-2. Arsenal have been poor on the road once again this season as they’ve won just one of their last 12 Premier League away games so it’s difficult to see them getting a result at the defending champions.

With the game being played behind closed doors, it could take away some of the ‘home advantage’ but Man City should still have enough to get the job done. Arteta will be desperate to get one over his mentor but Guardiola’s men should ease to victory tonight.